We were shopping at the Driftless Market in Platteville last weekend and we picked up a slice of Dunbarton Blue from the Roelli Cheese Haus  in Shullsburg.  We’d never had anything from Roelli before, even though we drive past their store whenever we go down to Illinois to visit Leslie’s family.  For some reason, Roelli wasn’t on my radar in the same way Uplands, Hook’s, Fayette Creamery, or other local artisan cheesemakers.  Well, the imperfection was mine.  And I’ve been really missing out. 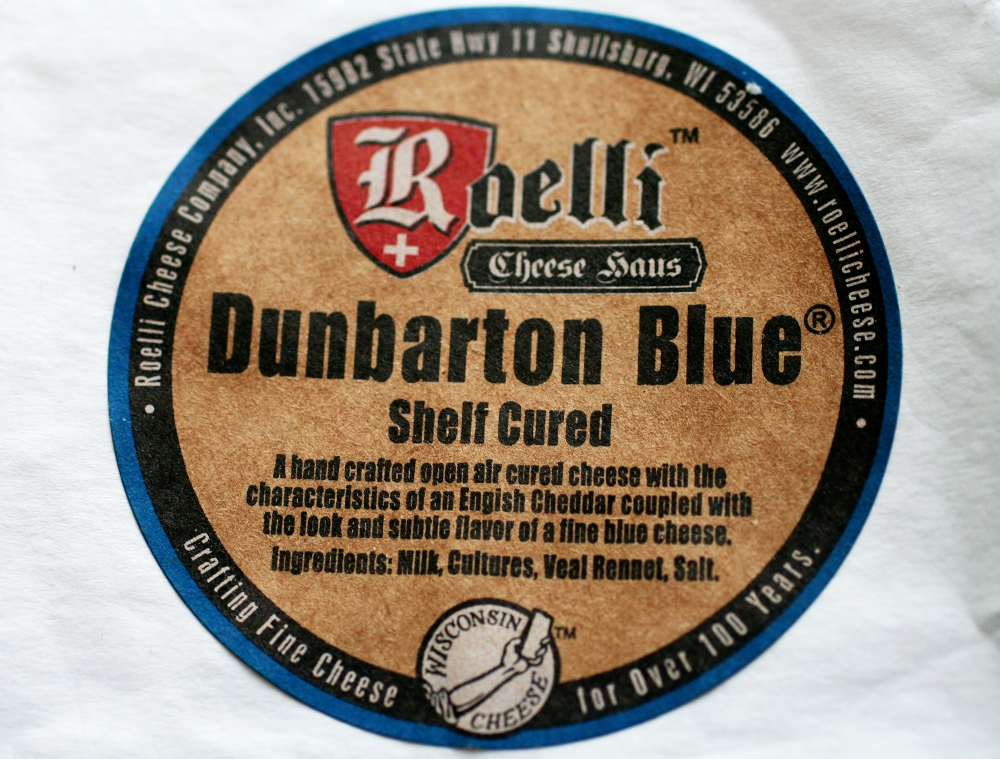 Dunbarton Blue is nutty, cheddary, subtle blue cheese created by cheesemaker Chris Roelli (you might recognize him as Mr. March from your Wisconsin Cheesemakers 2011 calendar).  It is relatively new; I believe it’s been on the market since 2009.  I hear it’s been selling very well, particularly in Chicago, but it hasn’t gotten the same press as other (deserving) cheeses like Pleasant Ridge or Hook’s 15 year cheddar.  I don’t know Chris Roelli, so I can’t give you any details about how he makes the cheese you can’t get from other reviews (here and here, for example).  The closest comparison I can think of is Blue Mont’s bandage wrapped reserve (another favorite), but really even those two are quite different. 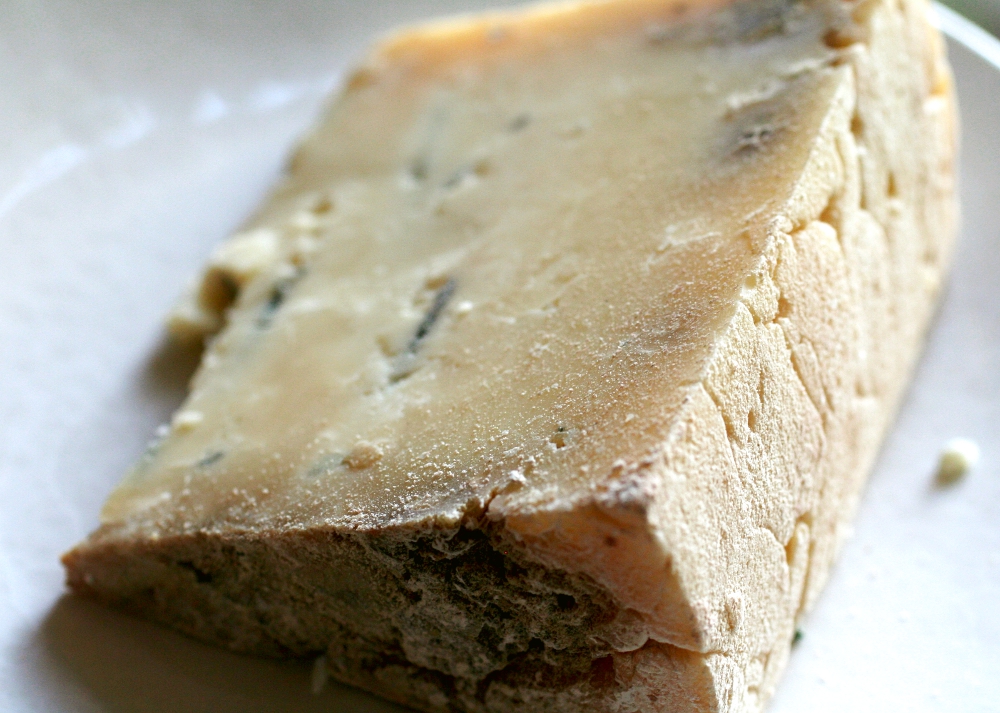 Like I said, I don’t know Chris Roelli, but I can judge him based on this cheese, and by that measure he really knows what he’s doing.  The complexity of the cheese is quite striking, with the nutty cheddar flavor blending with the earthiness of the blue veins, and the texture ranging from crystalline at the outside to almost spreadable in the center.  Unlike some other complex earthy cheeses though, we found the Dunbarton Blue played well with others and didn’t overpower subtle ingredients.

So… what did we do with it?  Well, the first half of the slice was gone before we could even find crackers to put it on.  We wanted to something a bit different with the rest of it, and since the week before Leslie had just seen the Godfather III for the first time, we decided to make gnocchi. 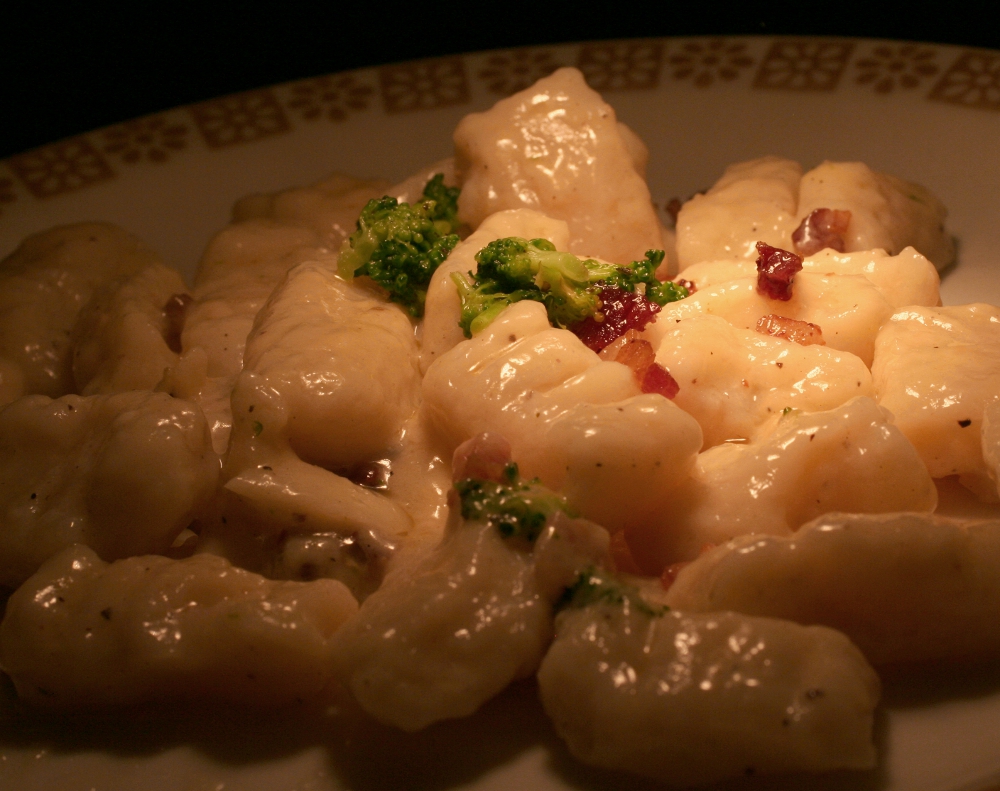 I had never made gnocchi before (actually, I’d only eaten gnocchi 3 times in my life).  When in doubt, I turn to Mario.  The following is Batali’s basic gnocchi recipe, modified slightly for my purposes:

Boil the potatoes for ~ 50 minutes, until soft.  Peel the skin and sred potato into fluffy flakes (we actually had fairly lumpy potatoes and it was no problem).  Mix in 2 cups of flour and the egg into the potato just like you were making normal pasta.  Work the dough for around 5 minutes until it is dry and smooth.  Add more flour if it’s still wet.  Roll out the dough into 1/2 inch diamter ropes and cut into 1/2 inch segments, then press a fork into the side to add ridges.  Toss the gnocchi into boiling water and cook until they float to the surface (about 1 minute).  Using a slotted spoon, quickly transfer into ice water to stop cooking. Then drain and transfer to a bowl.

To make the sauce, melt the butter in a pan and add in the dried sage, broccoli and bacon.  After a few minutes on medium heat, add the crumbed cheese and stir around to prevent it from clumping.  Once the cheease has softened, add in the gnocchi.  After a few minutes to warm the gnocchi up, remove from the heat and add the good olive oil (if you cook the olive oil to much you’ll kill the flavor).  Enjoy!