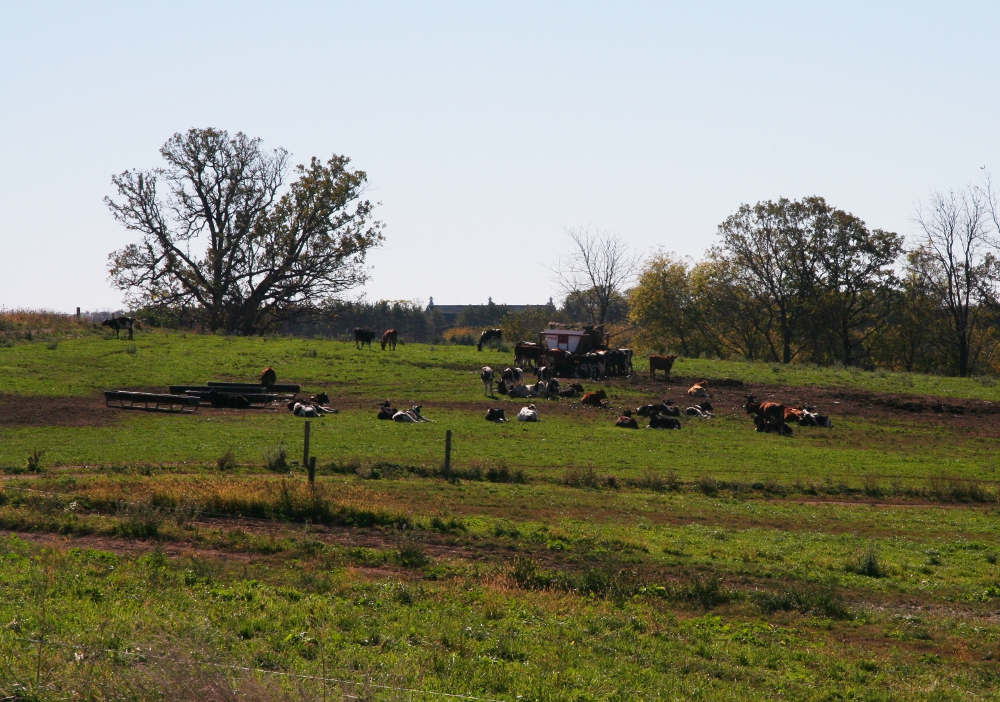 So, I’m reading Tony Bourdain’s Medium Raw right now.  In chapter 7 he’s talking about the changing face of fine dining in America and he quotes Jonathan Gold: “While nobody was paying attention, food quietly assumed the place in youth culture that used to be occupied by rock ‘n’ roll–individual, fierce, and intensely political”.  This strikes me as so obviously true that it isn’t even necessary to conjecture.  David Bowie has become David Chang.  That being the case, I don’t think Leslie went too far a few weeks ago when she called Andy Hatch “a rockstar in the cheese world”.  Andy is the cheesemaker at Uplands Cheese, the Wisconsin outfit that produces Pleasant Ridge Reserve, winner of the Best in Show at the American Cheese Society competition (in 2010, as well as 2001 and 2005).  If the name is still not ringing a bell, check out the cover of the Wisconsin Cheesemakers calendar  I’m sure you’ve bought by now.  Andy joined Uplands Cheese as an assistant cheesemaker in 2007.  I’m sure this year’s ACS award was extra special to everyone since it was the first Best in Show since Andy took over most cheesemaking operations from Mike Gingrich (one of the owners) in 2008.  Just to make it clear how impressive this achievement is, no cheese has won the ACS three times…or even twice. 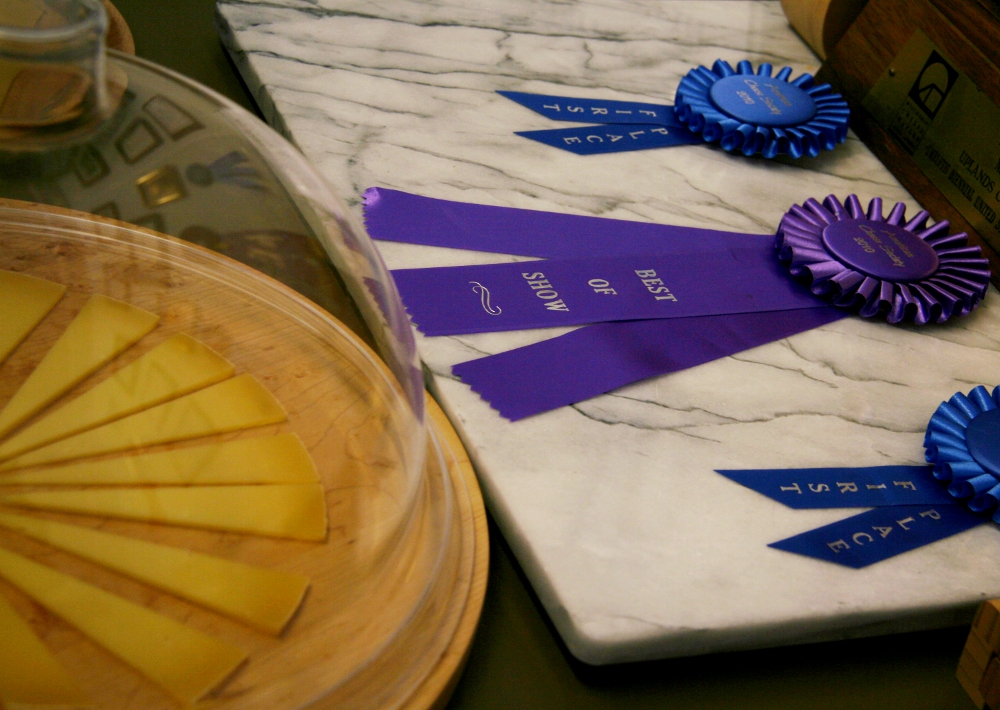 We first met Andy Hatch earlier this summer, at a pot firing party at Windy Ridge Pottery.  We recently saw him again in a more professional capacity.  We were lucky enough to be invited along on a press tour of Wisconsin cheesemakers put together by the Wisconsin Milk Marketing Board.  Due to other commitments (and a headcold) we were only able to make one day of the 3 day tour, but it was a great time.  We’d like to thank the WMMB for the invitation (full disclosure: the WMMB paid for the tour).  One of the stops the day we went was at Uplands Cheese.  It was in fact a bit weird that we had to get up early to drive to Madison so we could get back on a bus to visit a cheesemaker 10 miles from our house.  In fact, when we were leaving Uplands Cheese, the tour bus actually drove right past our house.  Along on the tour with us were more than a dozen other food writers and professionals (most of whom…all of whom are much better and more successful at this than us).  Many of them have already written about some of their experiences.  The ones I’m aware of are:

Again, if you want well written, nuanced and insightful analysis, check them out.  If you don’t want any of that, stay here. 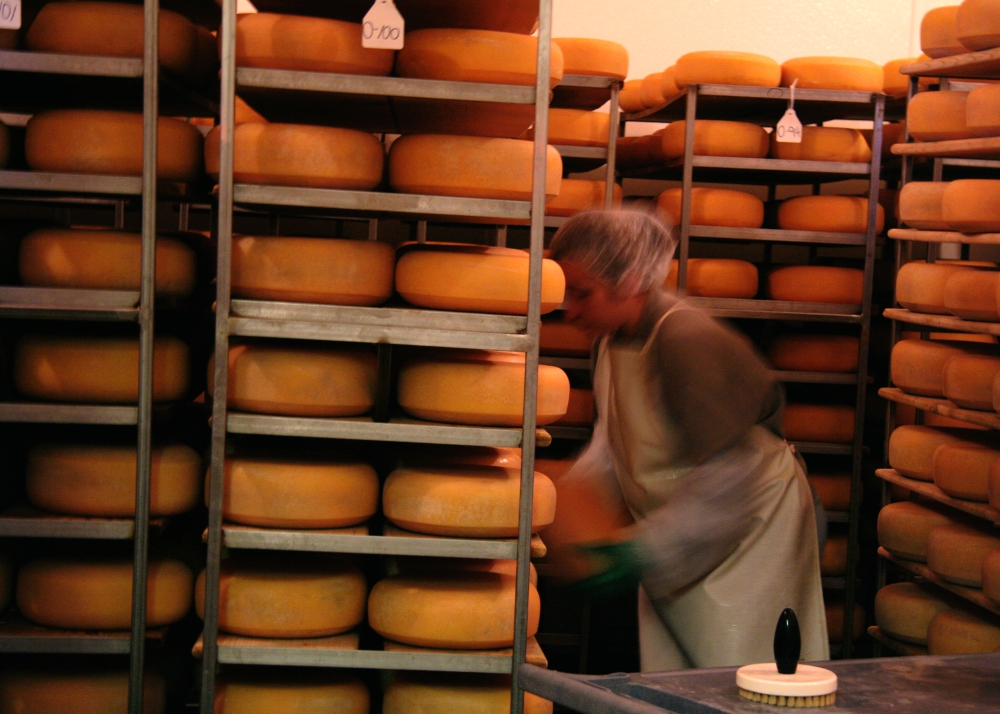 Uplands is know for one cheese–for good reason–they only make one cheese, called Pleasant Ridge Reserve.  It’s an Alpine cheese, similar to Gruyere or Beaufort.  It’s made from raw cow’s milk, only from Upland’s own cows.  Pleasant Ridge Reserve is made only May through October, the time when the cows are able to graze on healthy pastures. The cows are rotated through different pastures each day so they are always eating the best grasses and clover.  Each day’s milk is made into a batch of 10 lb wheels (seen above) which are then aged until ready to sell (due to variations in the milk, this time can be different for each batch, so Andy and Mike have to watch each batch carefully, and test it often to know when it’s time to sell it.

Both Mike and Andy come across as friendly, but very serious about their work.   While we were on the tour of their facility, I tried cracking a few jokes but couldn’t get a smile out of Andy (and, hey, I know I’m funny).  The whole mood and atmosphere at Uplands was very different from most cheese factories I’ve seen.  I wouldn’t say that the pace was slow, but it was…deliberate.  They seemed to spend a lot of time thinking about the cheese. The whole process looked so personal; Andy seemed to have a relationship with each wheel of cheese.  You got the very strong sense that they never rush things; they clearly understood that pressure to get product out the door can be deadly to quality, and that (for their business at least) they are far better off missing a shipment then sending out one sub-par wheel (although they also looked super organized, with Andy’s wife handling shipments, so I doubt they’re missing any shipments). 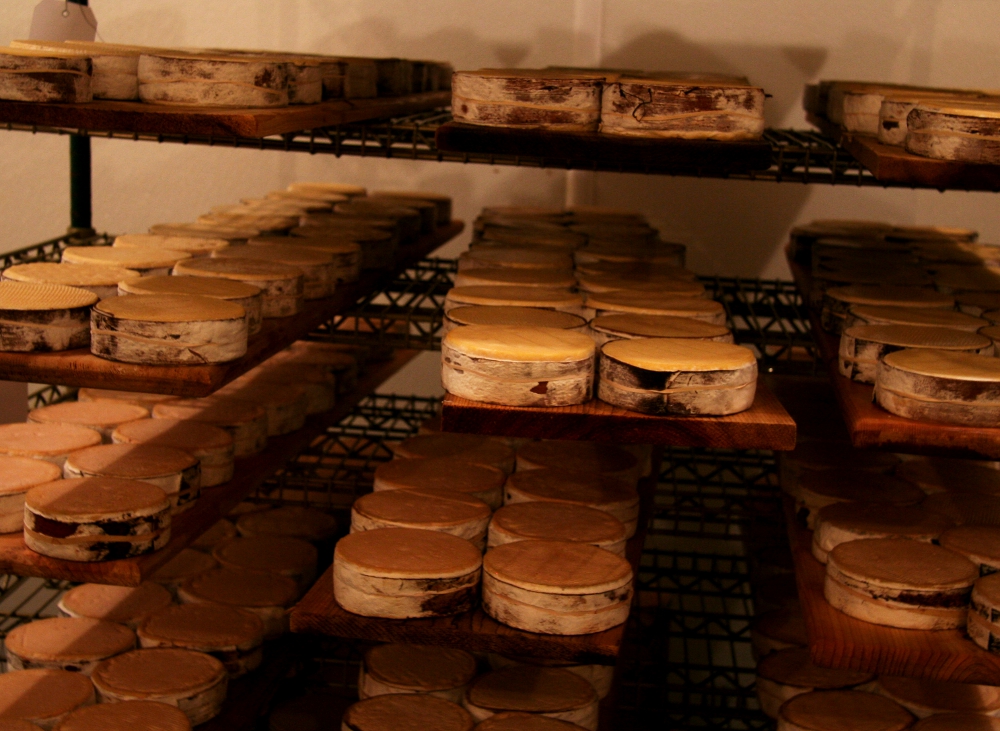 I said before that they make only one cheese, and that will be true for a few more months.  Andy is working on a new cheese, to be called Rush Creek Reserve.  It will be a washed rind, raw milk cheese aged to just past 60 days (the legal requirement for raw milk cheese in Wisconsin) made in the autumn months when the milk produced by their cows is more suitable to a bolder (i.e. stinkier) cheese than the subtle Pleasant Ridge Reserve.  Pictured above are some of the beta tests of the new cheese, which we were unfortunately unable to sample.  When it’s available we’ll be sure to talk about it.  And in the next few days we’ll write about some of the other parts of the tour we went on.

An Afternoon at the Tippy Top