Like most people, I make dinner based on what’s already available in the house.  Here is our delicious meal from last Friday.  Naming the dish was a bit difficult because it was inspired by a Filipino dish called pata tim but it wasn’t exactly like it.  Plus, I probably committed a sin by serving it with polenta instead of steamed rice.  Sorry grandpa.  Pata tim is usually a fatty pork leg with the skin still attached.  It is marinated for at least  a day in a mixture of soy sauce, garlic, bay leaves, brown sugar, and lots of black pepper (ground and whole).  After that it is deep fried and then slow braised in the marinating mixture with the addition of fresh or canned pineapple slices.

Well I didn’t have the pork leg but I did have a pound and three quarters of pork shoulder from Marr’s Valley View Farm.  I ran out of regular soy sauce but I did have kecap manis, a viscous and sweetened version of soy sauce from Indonesia.  The bay leaves were Turkish and they fresh pineapple was from Costa Rica.  I had some fresh pineapple in the house because I decided that winter should be tropical fruit appreciation season.  After a quick look in the freezer, I just realized that the Whole Foods brand of frozen haricot verts is from Belgium.  The bag of grits is from Oregon.  Just to cover everything, I have no idea where the black pepper and garlic came.  Cooking with local ingredients in winter is quite a challenge as you can see unless you are Tory Miller.  It’s impossible to live on root vegetables, various pickled products and meat all winter.  Well, at least, I cannot.  I should probably now change the blog name to “Drifting Appetite”. 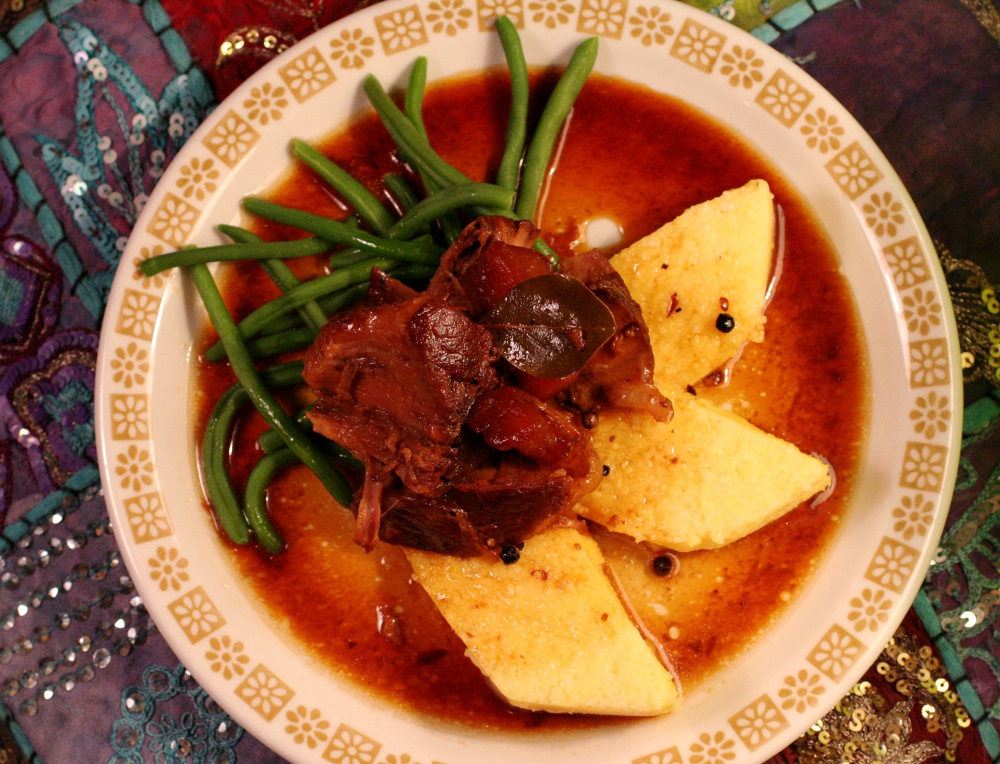 Preheat oven to 325 degrees F.  Put everything in an enameled cast iron pan.  (I started out with a frozen piece of meat.) Cover.  Place the pan in the oven once it’s up to temperature.  Cook for one hour.  After one hour, lower heat to 250 degrees F then leave it in the oven for about 4 hours.  Add another hour if you want the sauce to be more concentrated.

I made the polenta in the last hour of cooking the meat.  That way, it’s still warm at serving time.

Let the water come to a boil, salt it, then add the grits slowly while stirring.  Turn the heat down and let the mixture simmer, stirring constantly for about half an hour (the most laborious part of the meal).  After that, pour the mixture into a pan (I used a pie pan).

Overall, the meal had fantastic combination of flavors.  One might call this fusion cooking or perhaps CON-fusion cooking.  You be the judge.