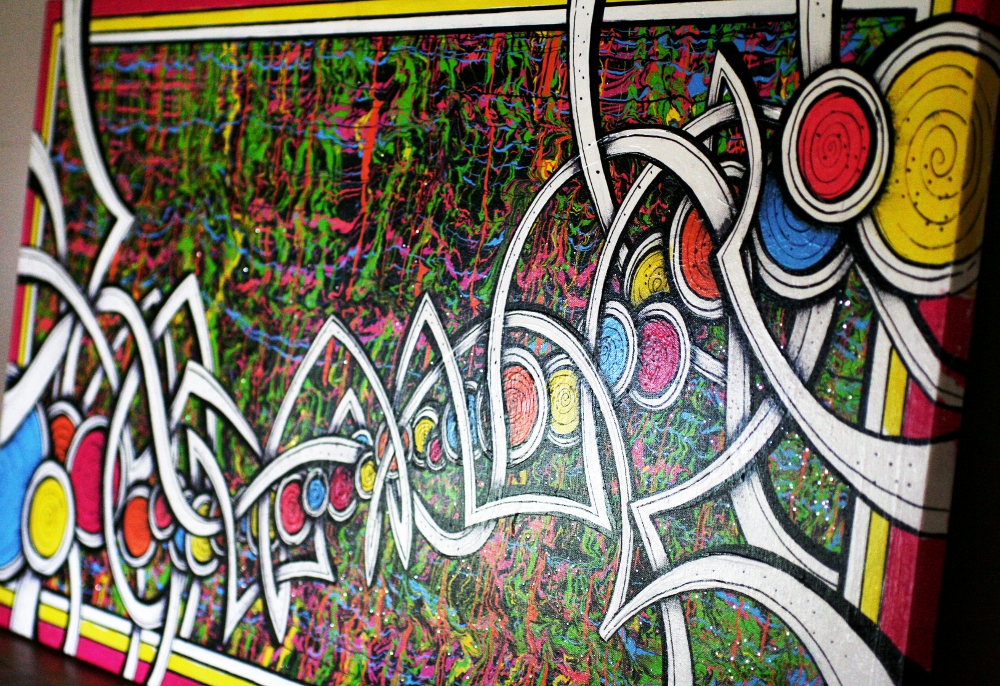 Two years ago at the Spring Green Art Fair, I remember being drawn to some really striking and imaginative paintings by local artist, Nick Ringelstetter.  I just knew I had to have one of his pieces someday.  Two years later while visiting with my friend Claire at the Johnston Gallery in Mineral Point, she informed me that they had just started carrying some new pieces she thought I might like.  They turned out to be Nick’s.  I saw the one I just had to have, a quick photo text to Keith to see if he agreed, and we purchased our first painting.  Quintessential Wisconsin isn’t it? 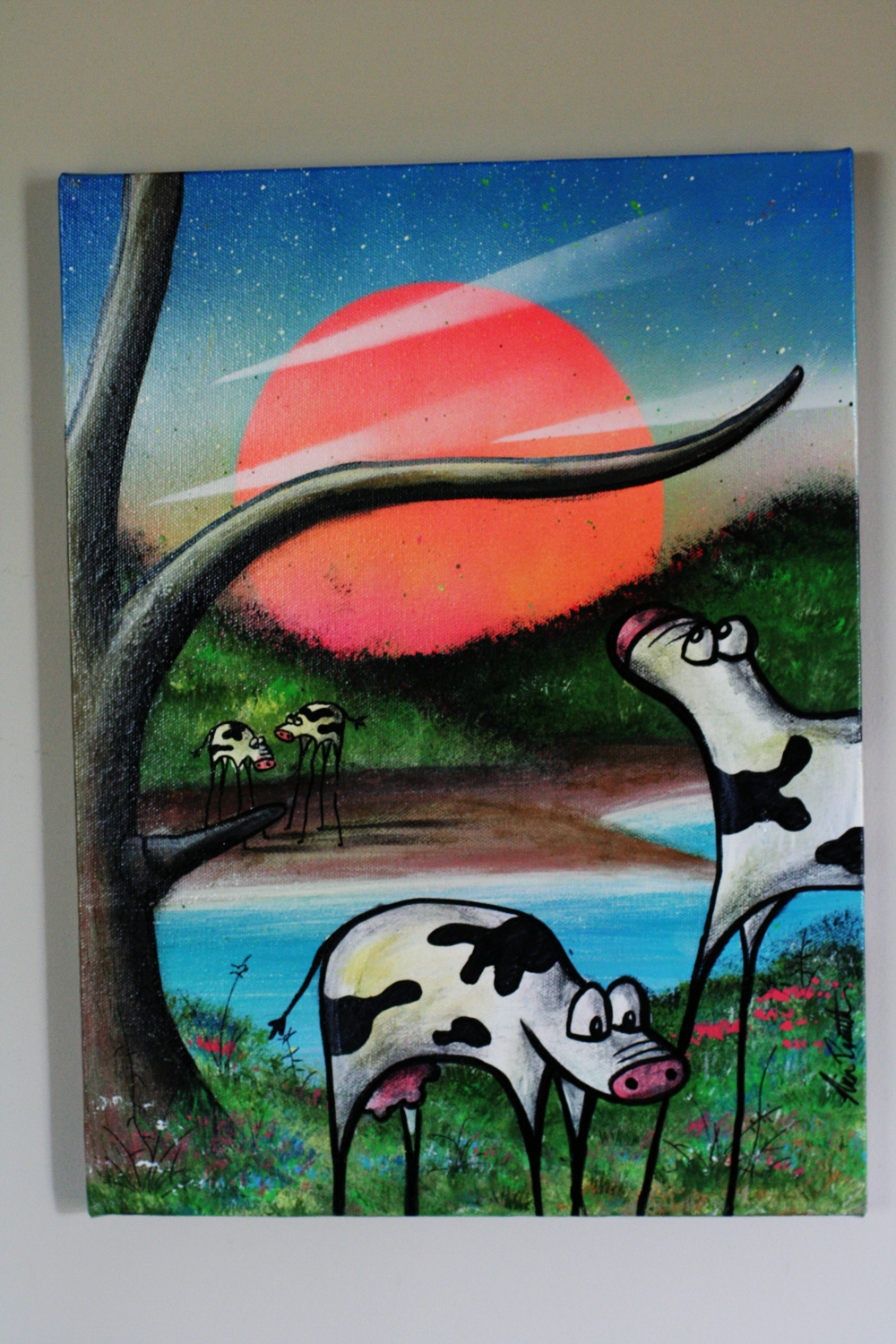 The week after my first purchase, Nick started a Facebook page for his work called Atomic 7 and I “liked” the page.  As luck would have it, I won the first giveaway, a 24″ by 48″ piece from his early works called Candy Graffiti.  I was ecstatic!  I’ve got the Cows & Moon hanging above my piano and the other one in the dining room.  Everyone who comes to the house have admired the paintings.  My music students especially have been having a fun time interpreting the work below.  Maybe it’s a mutant robotic spider with color-coded superpowers, said one of them.

Nick has been seriously painting urban graffiti style art for only three years.  This young artist is definitely on the rise.  According to the “Yearly Blog” section on his website, he sold 315 paintings last year, quite a significant rise from the 15 he sold  in 2008.  Artists he admires include Andy Van Schyndle, Mikey Teutul and Banksy.  I’ll definitely be following his work.  Finally, what you’ve really been dying to know, Nick’s recipe for Cocoa Coffee, his drink of choice when he is working in the studio.

Fill a cup 3/4 of the way with water.  Heat for 2 minutes then stir in the cocoa powder.  After that, pour enough coffee to almost fill the cup then put in a little cream.  *If Nick happens to have some ice cream, he’ll likely top his drink with 2 scoops.  I’m actually having this delicious drink right now.  It’s great to have before you start your perfect fall day.

This weekend will be the annual Fall Art Tour here in Southwest Wisconsin.  You can check out Nick’s work as well as many more by local artists at the Johnston Gallery, the first stop of the tour.  The cup below was made by featured artist, Diana Johnston.  A perfect vessel for a hot cocoa drink don’t you agree?  Happy weekend and happy shopping to you all! 🙂 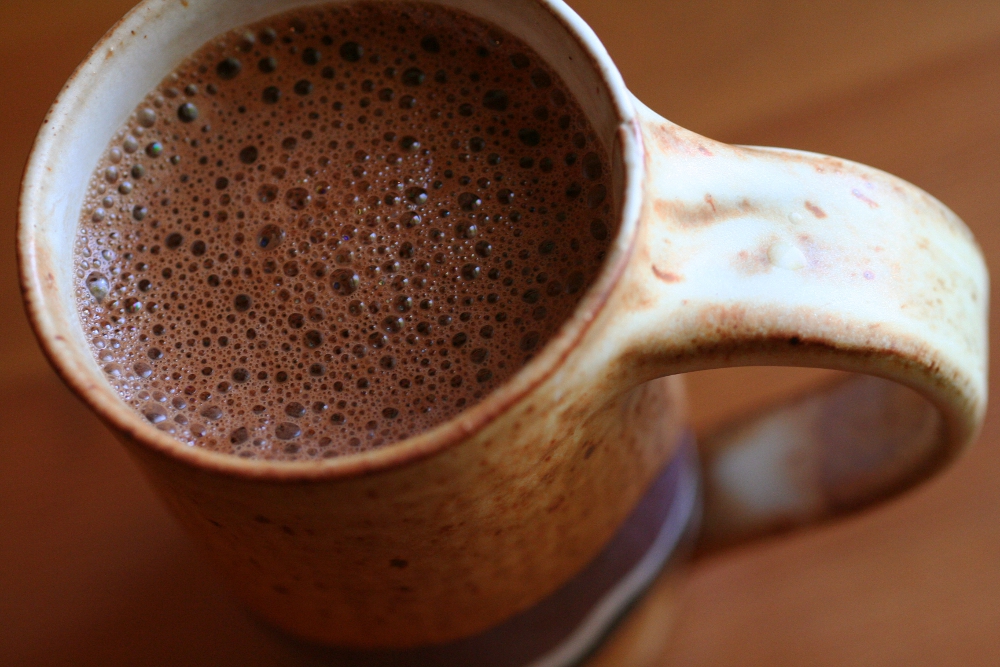