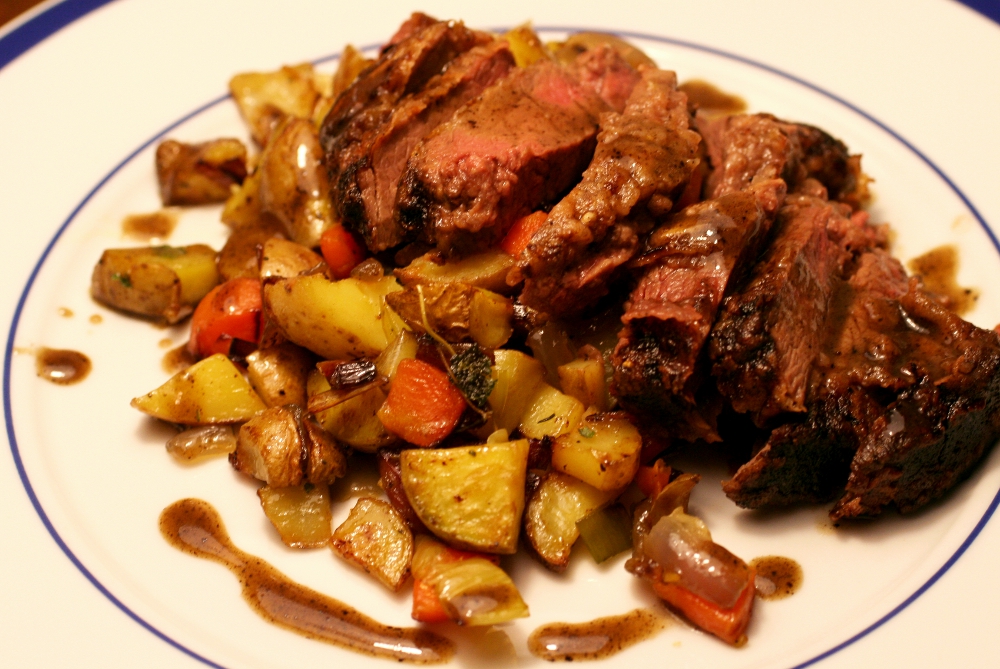 Gun deer season was nearly a month ago here in Wisconsin.  For those of you who aren’t hunters, or don’t know hunters, it’s difficult to understand how big an event this is.  In Wisconsin, it’s like the Packers playing the Bears, Bratfest, and fried cheese curds rolled up into one.   Now, I’m not a hunter.  It’s not that I have a moral aversion to hunting.  More like a moral aversion to sitting in the cold woods for hours.  In fact, I believe if we’re going to screw with the ecosystem (pretty much a given) it’s our responsiblity to try to manage the results.  And part of that is taking on the role of the predator to control the deer population*.

As a dyed-in-the-wool capitalist, however, I decided to outsource my predation duties to another.  My friend Jeremy Wilson was kind enough to share some vension from his freezer.  A few nights ago we enjoyed some excellent tenderloin, which we prepared using Jeremy’s suggested recipe.

Preheat the oven to 400 degrees F.  Get a large cast iron pan and heat it on the stove.  Add the olive oil.  Heat the salami, add the onions, leeks, and garlic and cook until a bit wilted.  Add the rest of the ingredients and place in to oven for about 45 minutes.

Mix the flour, salt, and pepper.  Coat the venison pieces with the flour mixture.  Melt the butter in the pan on medium high.  Cook for 4 minutes on each side.  Let it rest for a couple of minutes before slicing and serving.  Save the pan and use it to make the gravy.

Add a couple of splashes of brandy into the hot pan.  Dilute the water into the flour in a small cup.  Add to the pan.  Bring to a simmer.  It should thicken nicely.  Add salt and pepper to taste.

*This is obivously a large, complex, and emotional subject for many.  And I got hate mail when I said the Dells were kitschy, so I’m staying out of this one.