A few months ago, we went to visit my brother and his girlfriend in West Palm Beach.  Our friend, farmer Rink said that we might be interested in meeting up with his friend Eric who had just moved to the area.  Eric Hahn has been in the local food distribution business for many years.  He helped set up networks in Michigan and Illinois with the purpose to establish the first Farm to School campaigns for both Detroit and Chicago public schools.  This time, he is in Florida doing the same for the Palm Beach and Pinellas County Public Schools.  Florida is one of the lowest ranked states when in comes to providing nutritious meals using locally sourced produce in school lunches.  That will not be the case soon however.  I heard news from Eric just last night of an incredible contract award announcement.   It will make Palm Beach County Schools the largest and most diverse Farm to School Program in the United States!  Currenty, there are 48 states with operational farm to school programs and about 2,500 schools involved.  With about 100,000 public schools in the country, there are still a lot of kids to reach out to. 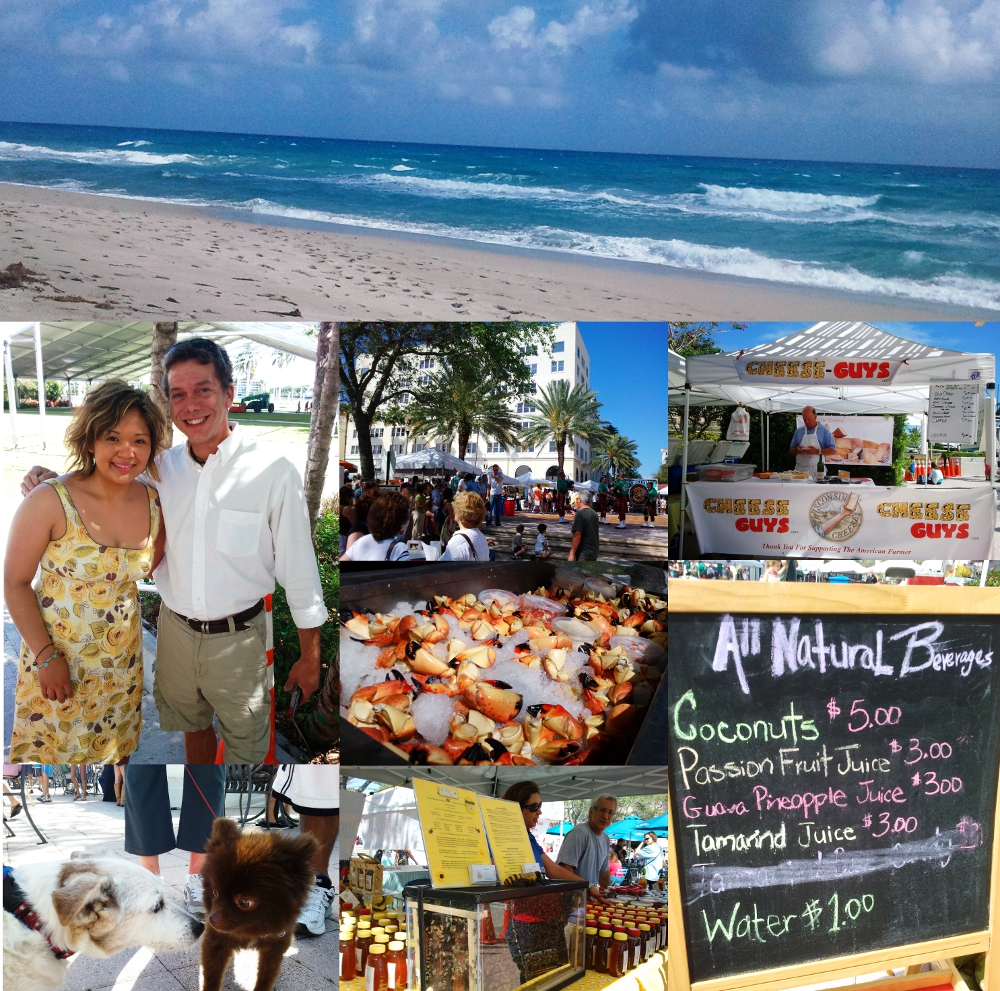 We met up with Eric at the West Palm Beach Farmers’ Market.  I love to check out the markets in every city I visit.  The best thing I had was a fresh coconut.  The vendor chopped off the top for me so that I could drink the water.  After I finished, he cut it in half so that I could eat the coconut meat.  It had been too long since I had a fresh coconut.  I also bought a bottle of of Tupelo honey and ate some deep fried conch fritters.  There were tents filled with orchids, someone selling several types of ceviche, a stand that offered roast pork cracklings and rice, and (to bring it back home), a Wisconsin cheese stand.  After the market, we went to a place called “Grease Burger” where we spent several hours eating (greasy burgers and cheesy fries), talking, and drinking beer in the sunshine.  I think everyone ended up having 8 drinks each and I almost finished my one.  And how can we ever forget George (the cute little brown Pomeranian pictured above).  During our lazy afternoon, about 50 people stopped to asked and take a picture with Lucky & Jenny’s dog.  He just might be cuter than my Ollie dog.

Anyway, if you ever find yourself in West Palm Beach Florida and want to go to a quiet beach, visit MacArthur Beach State Park.  It used to be a nude beach for the retired folks.  Hmmm…that may explain why it wasn’t so busy.  Cheers everyone. 🙂