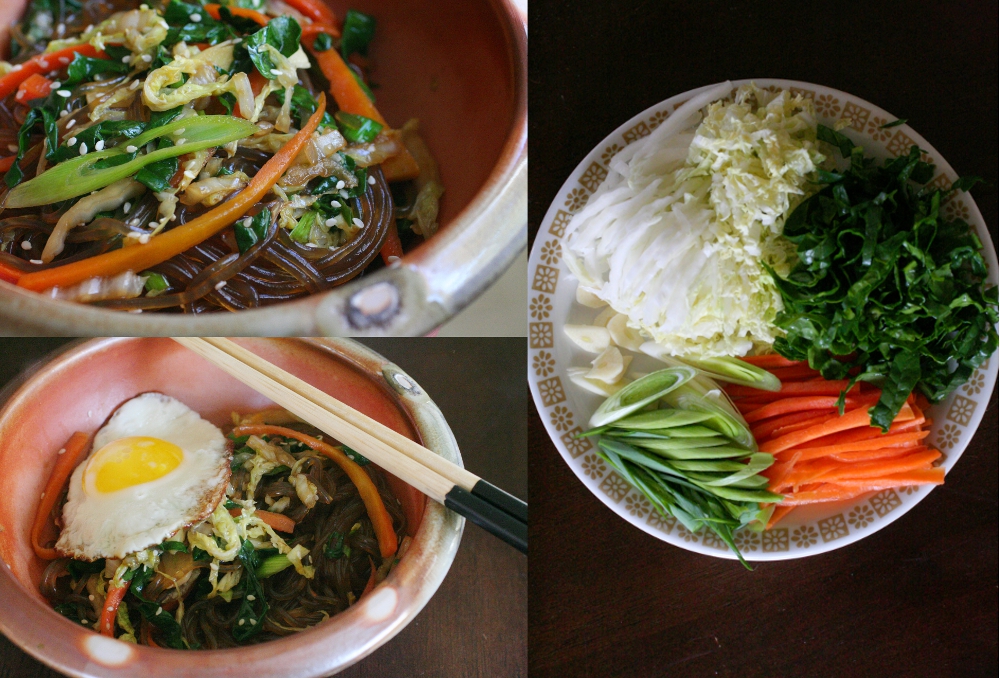 Japchae is a Korean noodle and vegetable side dish (banchan).  I make it about once a week and it is a go to dish to bring to potlucks.  You can use whatever vegetables are in season.  Mid-summer I even used some wild purslane that were invading my garden.  Carrots, leeks, spinach, and cabbage are plentiful now and they are just beautiful in this dish.  I can even imagine some golden colored and fuschia beets going well into it, maybe even some spaghetti squash.

I was first introduced to it by my best friend from college, Jikyung.  I especially loved the times when her mother would visit from Korea and I got invited to dinner.  We ate a lot of jabchae, kimchi, and Korean pancakes.   Most of the time, we satisfied our cravings at Dorca’s restaurant (which is sadly now closed) on Green St. on the University of Illinois Urbana-Champaign campus.

Before making this dish you will definitely have to go to your nearest Asian grocery store to purchase some sweet potato noodles.  It will say “Korean sweet potato noodles” on the package.  There are a couple of different sizes.  I prefer the size in between an angel hair pasta and a strand of spaghetti.  The soy sauce, sesame oil, and sesame seeds can be found in standard grocery stores.  Typically the vegetables used are scallions, spinach, and carrots.  Mushrooms (shitake) are also common in this dish.

*Veggies are from Shooting Star Farm

First you want to cook the noodles.  Boil some water.  Once it boils, add one portion from the package of noodles.  The noodles have a greyish color because of the starch.  Cook until the noodles are soft and clear (about 10-12 minutes).  The water will turn greyish.  Drain and wash with cold tap water.  Set aside.

I usually prep the veggies while the noodles are boiling to save time.  You can used as much or as little as you like.  Slice the veggies into thin strips.  Put the oil in a pan and fry garlic and the leeks brieftly (2 minutes)  add the rest of the vegetables except for the spinach and cook for about 3 minutes.  The noodles come next and then the sauce.  Add 1 T. sesame oil and 1 T. soy sauce plus the brown sugar.  Taste it.  Add the extra 1 T. sesame oil and 1 T. soy sauce if you want a stronger flavor.  *Sometimes I add a bit of fish sauce because I like it!  Add the spinach for the last 2 minutes of cooking.   Serve with a little kimchi, rice, a fried egg, or all of the above for a very satisfying meal.