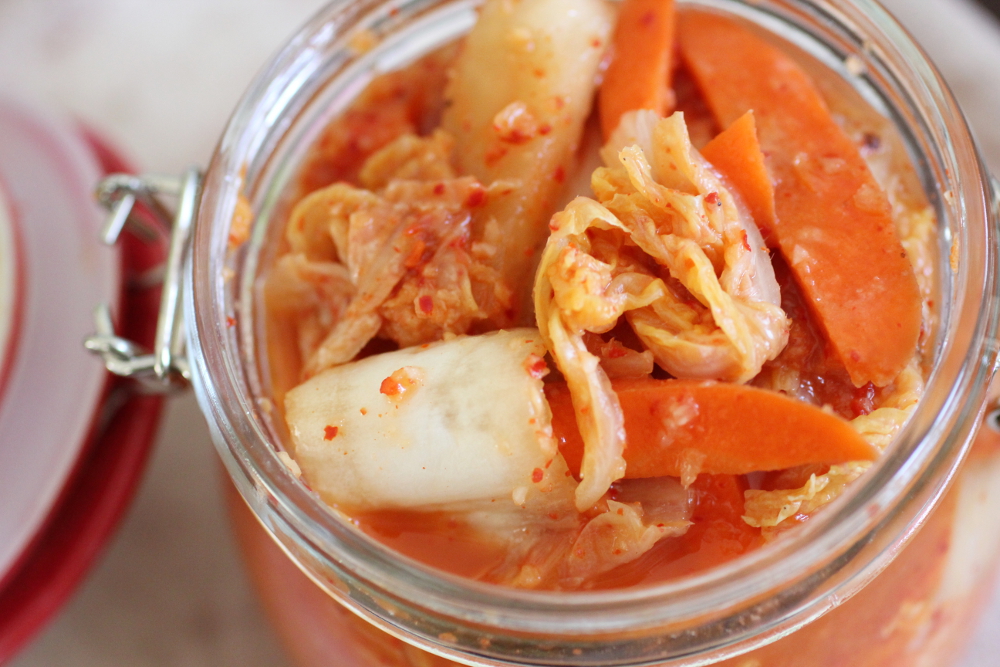 I’ve been on a fermented food kick lately.  I’ve made some sourdough baguette, bagels, and boule with starter, flavored liqueurs, and kimchi.  Kimchi is a kicked up pickled cabbage and happens to be the national dish of Korea.  It is made mostly with napa cabbage (sometimes with other vegetables like radishes, leeks, and carrots) along with a very generous amount of garlic, Korean chilis, ginger, and fish sauce.   It is unapologetically bold, to say the least.  In fact, many Korean households have a special fridge for the stuff.   I usually triple bag my jars and rinse the outside of the jar each time I open it.  A single droplet can flavor everything in your fridge.  Kimchi can easily be found outside of Asian grocery stores.  I’ve seen jars of the stuff at Metcalfe’s , Whole Foods, and Willy Street but you just can’t beat the home-made stuff.  I guarantee you will be hooked.

I had been planning on making kimchi ever since I found Korean pepper (gochugaru) seeds from Dr. Dave of Midwest Chili Peppers based in Madison (who I first learned about from my friend Denise of Digging in the Driftless).  I started the seeds indoors then planted them in my summer garden but only got a dozen of peppers from 4 plants that survived.  I’ve also got my one Korean friend, Jikyung, who has eaten so much kimchi that it probably runs through her veins.  That would make her an expert.  She has also watched her mom make a lot of kimchi.  The weekend before the new year Jikyung brought some dried and roasted Korean peppers from her mom, some fish sauce, and something called saeujeot (salt fermented young shrimp).  Hard core kimchi makers use sauejeot or even fresh oysters but you can stick with just the fish sauce.

Can You Smell It?

The process that takes the longest is salting cabbage and letting it sit for several hours to draw out the moisture then squeezing and rinsing about three times.  The kimchi paste is then mixed together then massaged into the cabbage.  After that, it is ready to eat but pace yourself because the best stage to eat this is after two weeks.  Jikyung and I tried it right away with steamed jasmine rice, fried eggs, bean sprouts, and spinach.  You can also eat it with jabchae.

Slice the cabbage into 1 and 1/2 inch squares.  Place in a large bowl and sprinkle generously with salt.  You probably won’t use the full cup.  Mix and massage until the salt is evenly incorporated.  Let it sit for 4-5 hours.  After that, the cabbage will be wilted.  Squeeze out and discard the liquid.  Rinse three times.

Cut up the radish and carrots and set aside.

For the paste.  Get 2 cups of water and mix in the rice flour using a whisk in a sauce pan.  Heat gently until you’ve got a gravy-like consistency and then liquid is semi transluscent.  Cover and let it cool.  In the same pan, mix in the pepper, fish sauce, fermented shrimp, garlic, and ginger.  Mix the paste into the carrots and radish then add the cabbage.  Massage until thoroughly incorporated.  Give it a taste and see if you’d like the balance of flavors.  Make adjustments according to taste.  Place the kimchi into canning jars.  Rinse the jars and store them out of sight for a week.  I had mine sit in a cool spot in the basement (about 60 degrees Fahrenheit).  After one week, you can refrigerate.  If you are worried,  you can choose to refrigerate right away.  That’s it.  Enjoy! 🙂

*You can buy  all of the ingredients at Asian grocery stores.  Just tell them that you are going to make kimchi. 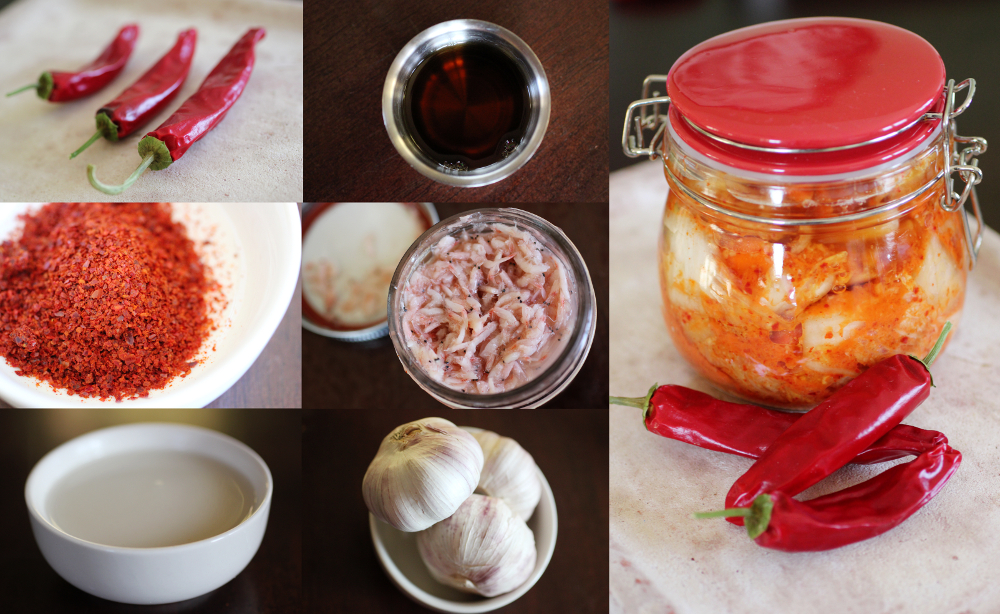