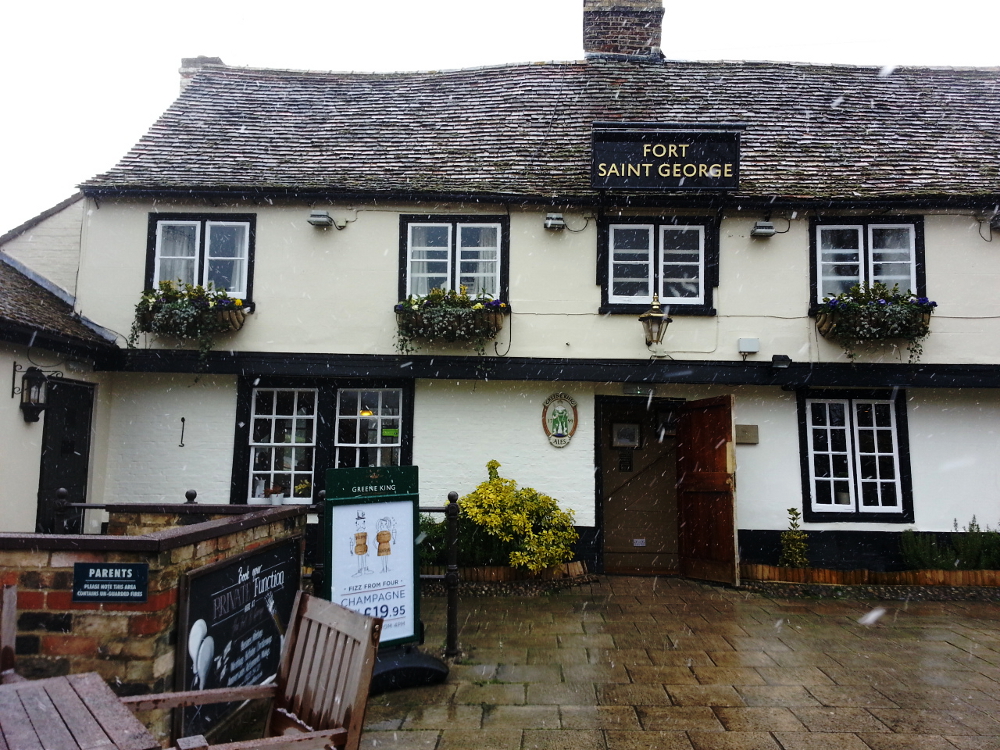 Last April, Keith and I went to England to celebrate his grandparent’s 90th birthdays.  The trip was also our 30th birthday treat (more on this later) to ourselves.  It was a great time with the family and we enjoyed excellent food and birthday champagne.  Here is a little peek of our Cambridge walk around with cousin L.

The first picture below on the left are the famous punts that you can take along the river cam to view the famous colleges.  When we passed by, the guy who was working there tried to convince us to go punting.  I said no and he replied “You’re dead to me!” (in jest).  On our last trip there we had really good weather and cousin M even operated the punt.  Next is the Mathematical Bridge which connects two parts of Queen’s College.  A fine example of tangent and radial trussing (you look it up).  Next is Corpus Christi College, notable for being the only college founded by Cambridge townspeople.  In the row below, are a couple of posh students who were about to graduate in their black gown with pink silk and ermine shawls.  A bit above to the right is a luscious market booth. 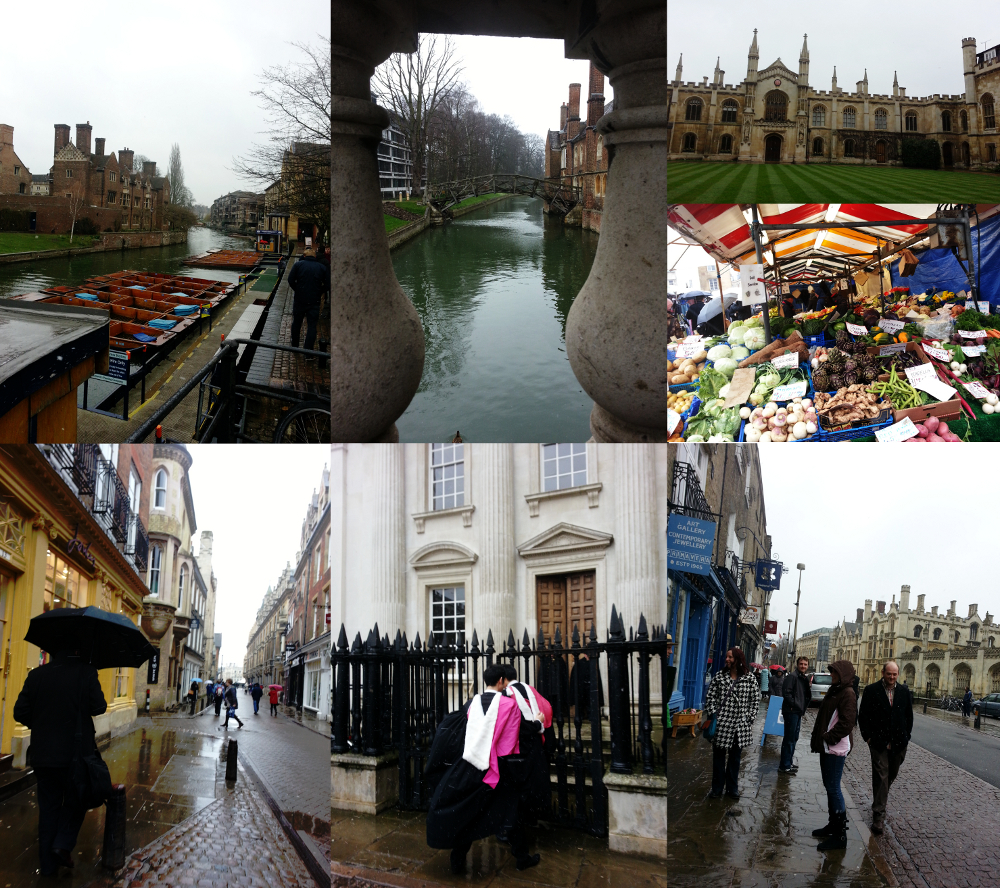 Moving on is another picture of the Cam River with the only punt operating that afternoon filled with some brave tourists.  It was very cold that day but I found it beautiful and romantic with the bit of snow and the wetness making everything darker and shinier.  Next is a favorite structure of mine, the door with some steps going down to the Clare College gardens. 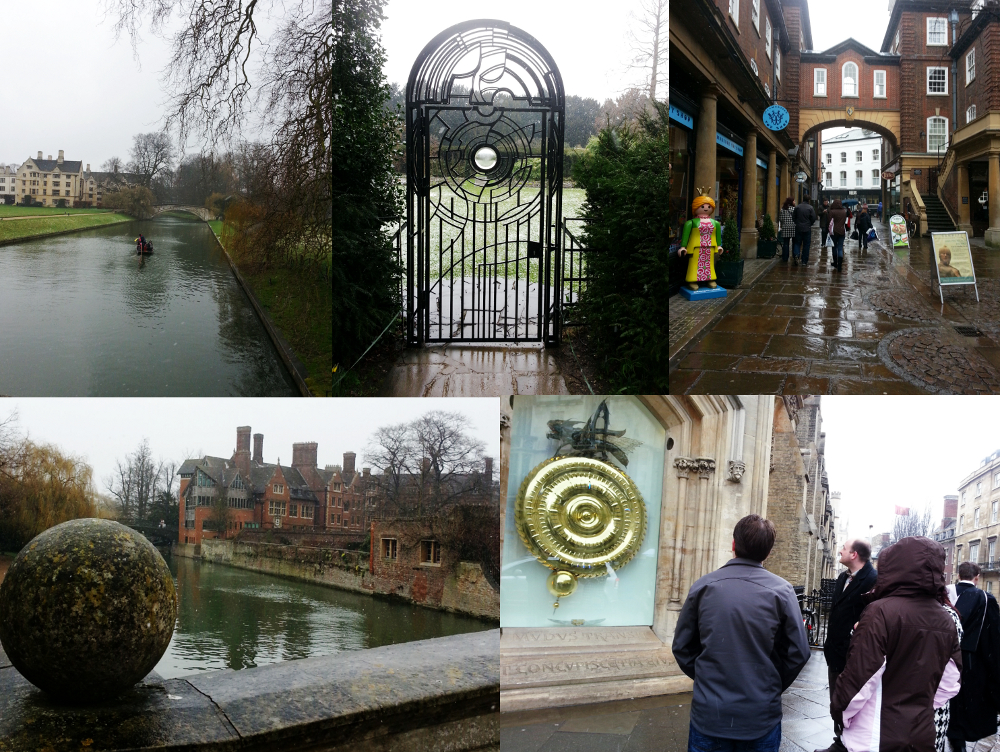 The big gold thing above is the Corpus Clock designed by John C. Taylor.  It was inaugurated in 2008 by Stephen Hawking.  The clock is made of stainless steel with 24-carat gold.  On top was a grasshopper sculpture, the clock’s escapement.  Taylor calls it the Chronophage or eater of time.  Keith was pretty excited by it because he is into watchmaking so he gave us a little lecture (as he is wont to do with many subjects).  We walked around a bit more.  C and I somehow became obsessed in search for the perfect toast racks.  Finally we were cold, tired, and in need of warmth and nourishment.  We walked across a field, against the wind, snow and rain, and finally reached the best part of the day, Fort Saint George.

Fort St. George is the oldest pub in Cambridge with parts dating in the 16th century.  Apparently, Will and Kate, had recently visited the place.  We had ale and mulled cider to begin with.  I’ve got a shot of the fish and chips below but not the rest because I was too lazy.  C and I each had the gigantic fish and chips platter with our favorite mushy peas.  M had the steak and ale pie.  L had a fish cake with salad and Keith had the Gloustershire sausages and mashed potatoes.  We washed it all down with some ale and mulled cider.  Delicious. 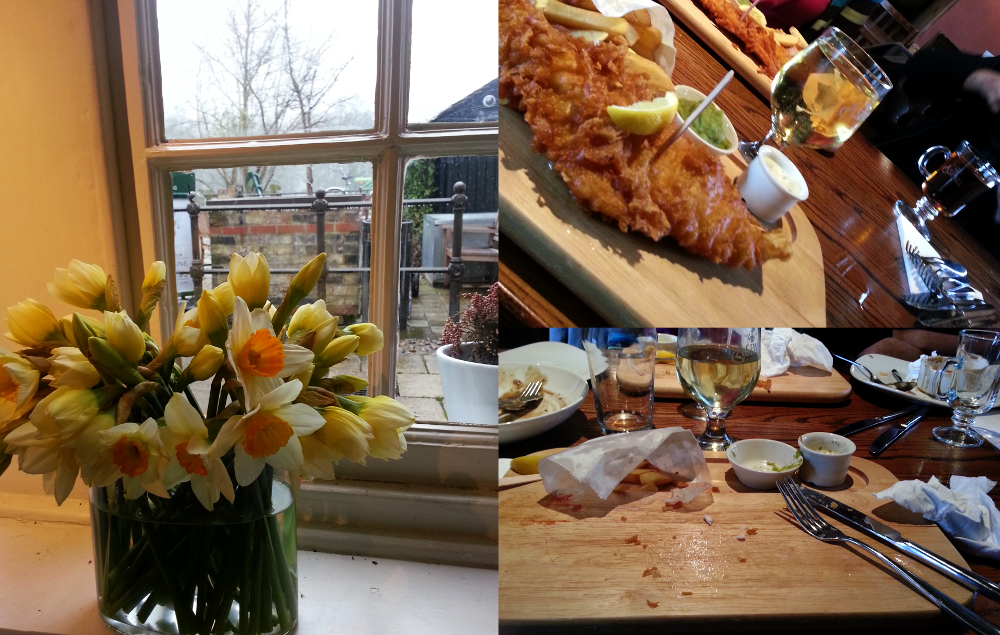