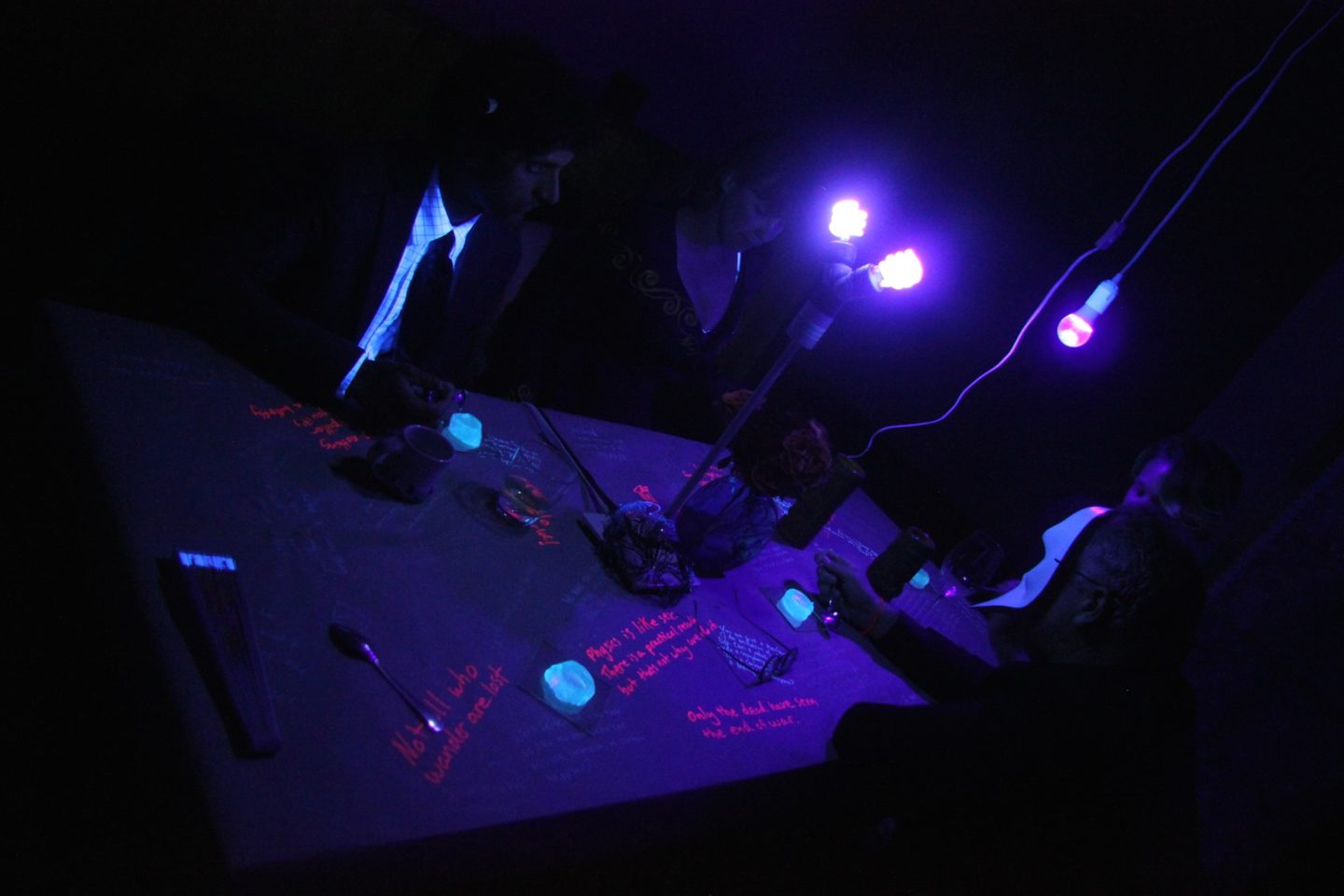 “Did I request thee, Maker, from my clay
To mould me man? Did I solicit thee
From darkness to promote me?”

If you wanted my advice on how to live an interesting life, I’d say it’s all about following threads. Every day we are presented with a tapestry of information. And yes, it’s great to try and see the whole work, but I find the things that have changed my life have been when I’ve picked up a thread and wondered “Where does this lead?” That’s how we ended in Mineral Point, after all. We visited this town one cold, gray winter day and found it charming. We could have left it there and continued on with our life in Madison, but for whatever reason we decided to follow the thread we found here.

This last year, I picked up a thread without even an inkling of how much impact it would have on me. I was working on a paper for a literature class I was taking (the paper was about digital humanities research). I came across an article about Lance Weiler, who runs something called the Digital Storytelling Lab (DSL) at Columbia University. It sounded like they did interesting work, researching the potential impacts of technology on the forms and functions of storytelling. Intriguing enough, particularly since I am a Columbia grad, but none of that was what I needed. I could have just moved on, I had that paper to write after all, but I decided to follow that thread for awhile. I went to the DSL’s website, and read more about their work. I saw that they had been doing this project called Frankenstein AI: A Monster Made by Many, and they’d just had an event at the Sundance Film Festival. The idea behind Frankenstein AI was to start a conversation about what we might want artificial intelligence to be like, and through that discussion to understand better what the best version of ourselves might be. I then saw that they were building a version of the event as a dinner party and they were looking for volunteers to host prototype dinner parties on Halloween to assist with the design. I signed up immediately.

I knew exactly want I wanted to do with the party. We’d already been playing around with the idea of hosting an 1800’s dinner party, and Frankenstein was written in 1818. I’d also been looking for a reason to do some real modernist cooking and combining the modernist and the 1800’s menus would be a great way to bring together the Frankenstein and the AI themes for the dinner party. We’d already been talking with some friends, Jeff & Esther, about hosting an event together and this seemed like the perfect opportunity. Jeff immediately volunteered to handle all of the 1800’s courses. After a few brainstorming sessions, this is the menu we came up with:

Jeff started the dinner off with a perfect seasonal salad with walnuts, bacon, and onion dressing, and for the main course he made slow cooked beef shortribs in a red wine reduction served with green beans and mashed potatoes. Alternating with these warming, filling dishes I concocted modernist dishes, making them as futuristic and bizarre as I could.

I spent hours reading through cookbooks from Heston Blumenthal, Grant Achatz, and Nathan Myhrvold looking for ideas. I ended up making a trio of starters and a dessert. The first starter was inspired by a pork belly salad served at State Bird Provisions in San Francisco. They change it around a lot, but when we were there is was fried pork belly with sliced jalapenos, grape halves, cilantro, and a vinegar dressing. I loved their particular combination of spice, acid, sweetness and fat. I wanted to recapture those flavors, but in a more minimalist presentation. I also wanted a lighter take so we could build up to the fatty short ribs. I halved grapes and dressed them with a serrano pepper vinegar, and then dusted them with bacon fat powder made by combining rendered bacon fat with tapioca maltodextrin (available from N-Zorbit).

I worked on a bunch of different ideas for the second dish. For awhile I was planning on making centrifuge pea butter, but the centrifuge I have a work is really small, and I worked out it would take me something like 100 hours to make enough pea butter for fifteen people (Fun fact: peas are only 0.4% fat). I moved through a lot of other ideas (ultrafiltered soups, sous vide soft boiled eggs, etc), but I came across a white tomato soup somewhere and loved the idea (it is white because you filter out most of the pigments in the tomato with ice filtration. Instead of a soup, I ended up making it as a foam which I stabilized with gelatin and served on top of a cheese cracker, made by microwaving disks of shredded parmigiana.

The final starter was the easiest. I came across these black garlic kimchi caramels with edible wrappers and fell in love. I modified the recipe a bit, to use Leslie’s homemade kimchi rather than just kimchi base, and added a sweet note by blending in Hawflake pastilles. Hawflakes are a candy popular in China made using the fruit of the hawthorn tree. I wanted to use them because in my research on futuristic foods I found out they used hawflakes as a prop on a favorite science fiction show of mine, Farscape, where they were the ubiquitous and nutritious (but bland) Food Cubes.

Particularly after the black garlic dish (where I used locally fermented garlic from Black Garlic North America, by the way), I thought we need a palette cleanser. I found a simple sous vide recipe for making limoncello, which I served in test tubes for that appealing urine sample look.

The dessert was actually the very first thing I figured out for the dinner. I wanted to play with the environment, and had the idea of having the lights go out during the dinner party in a “storm”. This led me to the idea of a glow-in-the-dark course to serve with the lights off. I already knew that the quinine in tonic water would fluoresce under ultraviolet light, so I decided on a gin & tonic jelly to be served under black lights. Easier said than done though- quinine is quite bitter and getting the right balance of bitter, sweetness, and flavor from the G&T jello wasn’t easy. More than a dozen attempts later (all the way up the the morning of the dinner), I finally had the right combination (using Saint George’s Terroir gin). In the picture below, you can also see that we covered the tables in messages and quotes written in invisible ink that showed up only under the black light.

I’ve only described the food so far though, and there was a lot more to this party than just that. Remember the Frankenstein AI project I talked about at the beginning? With assistance from the Columbia team and other groups holding prototyping dinners, we built their Frankenstein AI narrative into the dinner. This was done through conversational prompts with each course, building thematic context into the environment, and a really handy tool used by the Columbia group called appreciative inquiry, which is used to help people break through conversational banalities and get them to really engage with each other.

The evening started with this appreciative inquiry exercise. Guests paired off, ideally with someone they didn’t know very well. One person in each pair started by telling a story about a time they felt particularly connected with humanity. The other person’s job was to listen and ask questions, to interview them and get to the heart of the story. After a few minutes they switched roles the the second person told a story about when they felt disconnected from humanity, with the first person then serving as the investigative reporter. The exercise did its job, people then went into the next phase of the dinner primed to be thoughtful, honest, and most importantly, to actively listen to each other.

Each course of the dinner included a conversational prompt to help guide discussion, though guests were free to ignore the prompt if they wanted. The only rules were: no discussing jobs, the weather, or current events, and to try to keep the conversation between the whole table, and not to break off into side conversations.

My favorite prompt was the one for dessert. I told each table a little about the computer scientist Alan Turing (many were already familiar with his story because of a recent film). I explained that he had developed this idea of a test in which a judge has two conversations via computer text. One of those conversations is with another human, the other is with a computer program. After a few minutes, the judged is asked to pick which one was the human. If a computer program could trick the judge, it was said to pass the Turing Test. There is an organization that runs an annual Turing Test when they actually test programs in these conditions, and each year they give out a Most Human Computer award to the program that does the best. But each year there is also a judge that does the best against the computers, and this judge is given the Most Human Human Award. I love this story, and so I picked one person at each table and asked them to interview their fellow guests and see which one could convince them the most of their humanity. That guest was given our Most Human Human At The Table award.

I could go on and on about this party. I could talk about how I learned how powerful controlling the context (setting, theme, etc) can be for guiding the “text” (i.e. the conversation). I could talk about how much fun it was to plan and organize. About the insane amount of work it ended up being, from which I feel like I’m still recovering. I could tell you about how the DSL is using information they collected from us and the other prototype parties to refine their ideas and build newer and better versions of the event. I could tell you how great it was that all the guests were completely game to try out this weird thing that I wouldn’t, or couldn’t, even explain to them properly. And no matter how much work or thought I put into it, it was (and always is) the guests that made this dinner party great.

If you’re interested in the design process behind the dinner, or want to find out more about the Frankenstein AI dinner parties or the DSL, please follow these threads:

Lance Weiler on our dinner party

*The title of the post is a reference to the awesome breakfast place by this name we came across in Chattanooga.