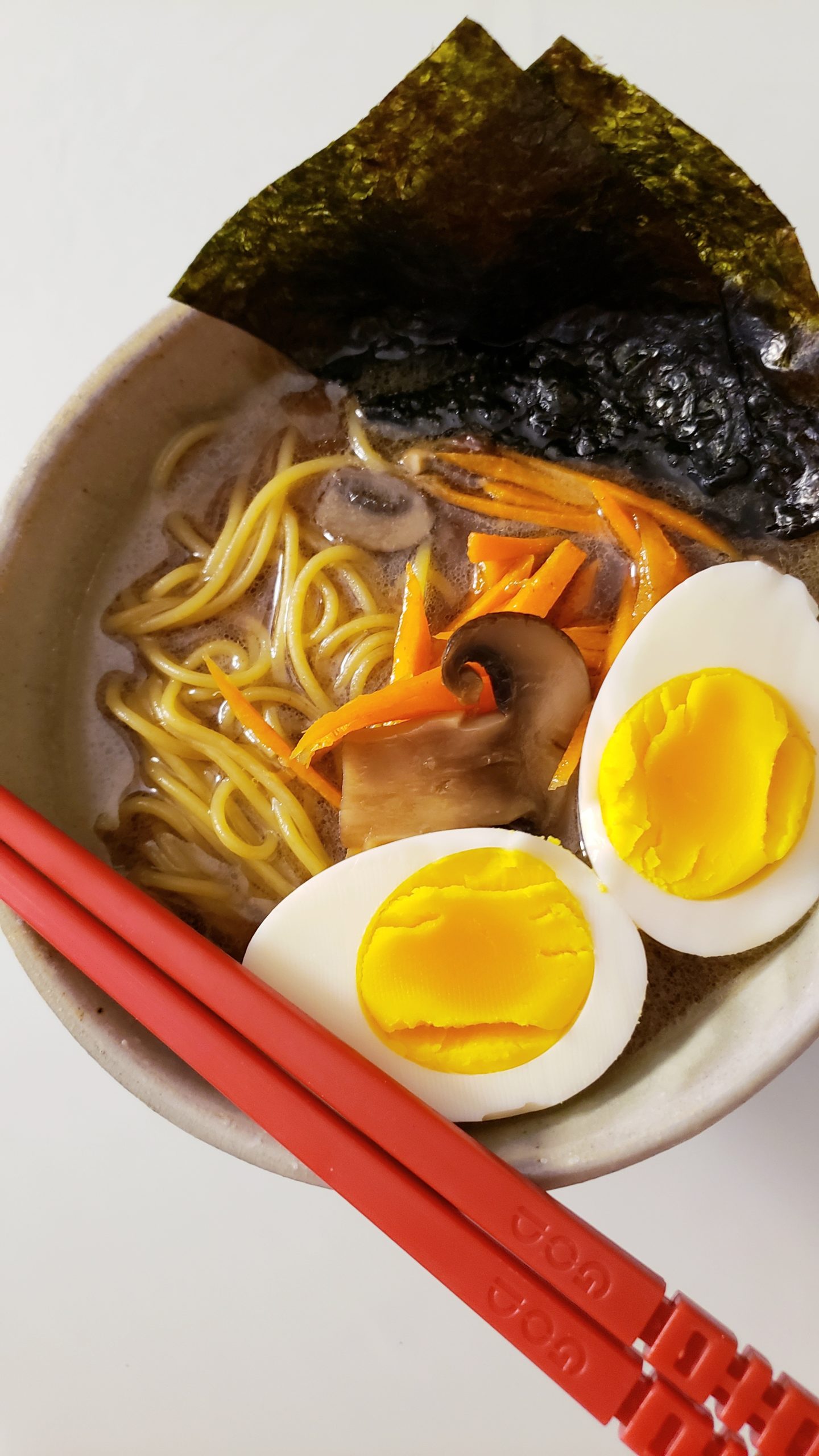 Like many people, I’ve been looking for comfort in cooking these last few weeks while quarantined at home. And while I have been doing some adventurous things, I’ve mostly been craving my comfort foods. My go-to childhood meal to make at home was instant ramen. Maruchan or Top Ramen– I wasn’t picky. But I did have a secret ingredient I would add to the soup which I may divulge at the end of this post. And my favorite place to go out for dinner as a kid was Olive Garden–specifically for the endless soup, salad, and bread sticks. I would always get the zuppa Toscana, and I’d always have one bowl too many.

In the last couple weeks I’ve recreated both of those meals, largely sourced from Enos Farms, friends of ours who farm near Spring Green and sell locally through their website (we’ve written about them here, and here). I’d bought 5 pounds of frozen kale from them and was trying to figure out what to do with it when I remembered the zuppa Toscana, which combines kale, potatoes, and sausage in a light cream broth. As it happened, I had ramp and mozzarella brats from Enos Farms as well, so I searched out clone recipes of the chain’s soup. In the end I combined a couple different recipes, and made a few modifications along the way, so here’s my version:

Melt the bacon fat in a dutch oven (or your largest soup pot) and add crumbled sausage (you don’t need to remove the casing, but I did). If the pan is too crowded, do this in two batches so the sausage can brown properly. Once you’ve browned the sausage, remove it from the pan and set it aside for now. Next, add diced salami to the pot. Cook for a minute on medium to render the fat in the salami. Alternatively, you can just use bacon instead of the salami, in which case you won’t need the extra bacon fat. While that’s cooking, dice the onion and add it to the pot as well. Keep an eye on the onion to make sure it doesn’t burn, and stir it regularly as you brown it. After five minutes or so, slice the garlic cloves and add them. Continue to cook until the onions are translucent. Next add the vegetable stock, water, black and red pepper, and return the sausage to the pot. While you bring this to a simmer, peel the potatoes and slice them to ~1/8″ thick rounds (I used a mandoline). Add the potatoes to the soup and cook for about 10 minutes. then add the kale and cook for another 10 minutes. Finally stir in the cream and adjust the seasoning if necessary. Tastes even better the next day.

A week later I was once again in the kitchen figuring out what to make for dinner. We’d gotten another order from Enos Farms–this time we’d bought some of their fantastic pork stock which I wanted to use. We also had a bottle of sake chilling in our freezer that we wanted to try so I decided to make ramen. I’ve made ramen noodles from stratch before (and Leslie briefly worked at a Japanese restaurant that made their own), but I was feeling a bit lazy. Enos actually sells ramen noodles themselves, but I hadn’t bought any. I had recently heard about a trick for making Italian pasta more like ramen noodles though, and I was eager to give that a try.

Ramen noodles get their characteristic flavor, color, and chewy texture from the addition of kansui, an alkaline solution which increases the pH of the dough. Other than that, they are a simple wheat noodle, like spaghetti. I had a bottle of kansui in the pantry–that’s how I’d made ramen in the past. But I’d recently watched a program from chef Sachie Nomura where she cooked spaghetti in water with baking soda to get a ramen-like taste. I figured I could probably do the same with the kansui, and a little online research backed that up (a third option is to used baked baking soda, which has better solubility in water than untreated baking soda). The effect isn’t perfect, but it’s pretty close.

Boil salted water for the noodles. For 2 quarts of water, I added 1 tablespoon of kansui. While doing that, in a separate pot heat the pork stock and add the mushrooms and garlic. Blanche the carrots in the stock and set them aside. Cook the spaghetti to just past al dente and drain. The water should have turned pale yellowish-green from the alkali (I don’t know the exact chemistry there, but I’m guessing the higher pH extracts more starches out of the pasta). Portion the spaghetti into bowls and ladle the broth over it. Serve with the carrots, hard boiled egg, nori, or whatever you like with your ramen.

Oh, and if you’d like to replicate my childhood ramen, use my secret ingredient: pour some cola (Pepsi or RC Cola recommended) into your ramen. It sweetens the broth and lowers the temperature so you can start eating right away!

Alive Together: A Recipe for Healing