Hello everyone, this is what we had for dinner yesterday.  What could be better than a BLT sandwich on a hot summer night?  Whenever we’ve bought a package of bacon from Lois of Marr’s Valley View Farms this season, we’ve cooked all of it so that we have ready to eat bacon to use anytime.  The best way to cook bacon is by baking it in the oven (tip from Alton Brown).  Place bacon pieces on a rack with a drip pan underneath, set the oven at 400 degrees F.  The pan should start in the oven cold.  Once, it reaches 400 degrees F, turn the oven off and let bacon cook a few more minutes until brown and crispy.  Marr’s bacon are thick sliced.  You might have to take the pan out as soon as it reaches temperature for the thinner sliced bacon. 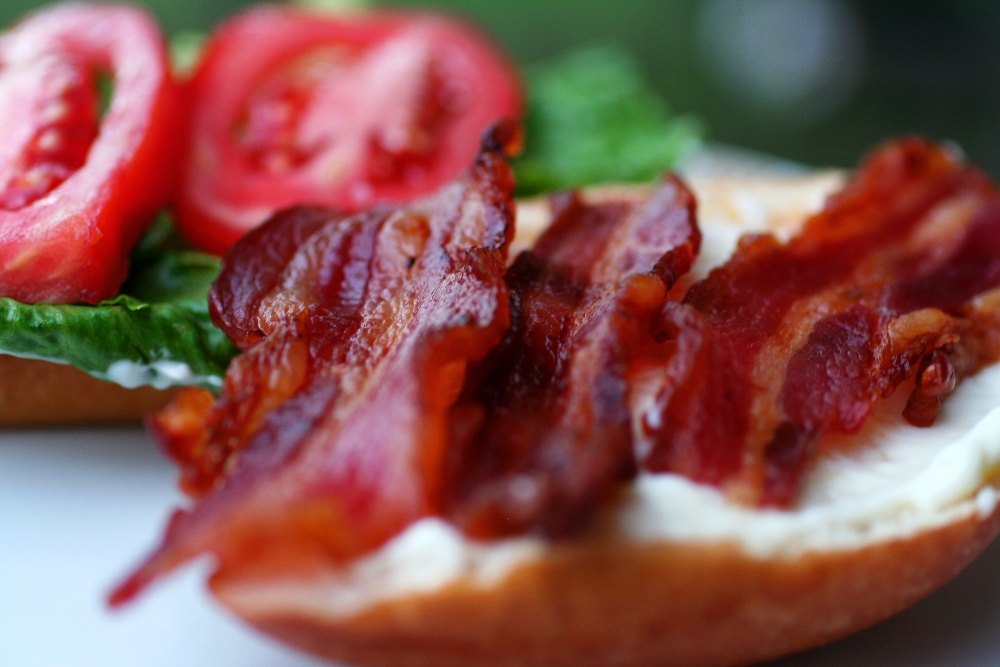 Do you know the origin of the word sandwich?  I didn’t until today.  It’s named after John Montagu the 4th Earl of Sandwich.  He had a penchant for gambling.  Not wanting his game to be interrupted he requested meat to be served between two slices of bread.  After that, others began asking for “the same as Sandwich”.  His travels to the Mediterannean most likely influenced him.  He saw grilled pita with meat and because of their obvious convenience took the idea home with him.  The First Earl of Sandwich, Edward Montagu, a naval officer, was to take the title Earl of Portsmouth but was change to Earl of Sandwich because his fleet was lying off the coast of Sandwich at the time (1660).  We could have just as likely to be eating BLT portsmouths for dinner last night or how about a peanut butter and jelly portsmouth?  For more information about the sandwich visit the Food Time Line website.

Put mayo on each slice of bread then layer bacon, lettuce, and tomato.  (Keith likes to sprinkle a little sea salt on top of the tomatoes.)  Make sure to have plenty of napkins because the tomatoes are so juicy.  Eat 🙂

Portrait of a Wisconsin Artisan Cheesemaker