About a month ago, Leslie and I went to see Tony Bourdain‘s show at the Overture in Madison.  For those of you who don’t know who he is, Bourdain is a former chef now writer/travel show host known for his acerbic nature and his ardent appreciation for “peasant food”.  His show, No Reservations, is a favorite at Driftless Appetite HQ.  The show at the Overture was essentially part book tour (for his new book Medium Raw) and part stand up comedy act.  Most of the stories I’d heard before (on his show or in his books), but still, the crisp delivery (and perfect comedian’s timing) made everything seem fresh.  We were also lucky enough to get tickets to the post show meet & greet (many thanks to Leslie’s friend H who told us about it and helped us get a second ticket) and meet Tony. 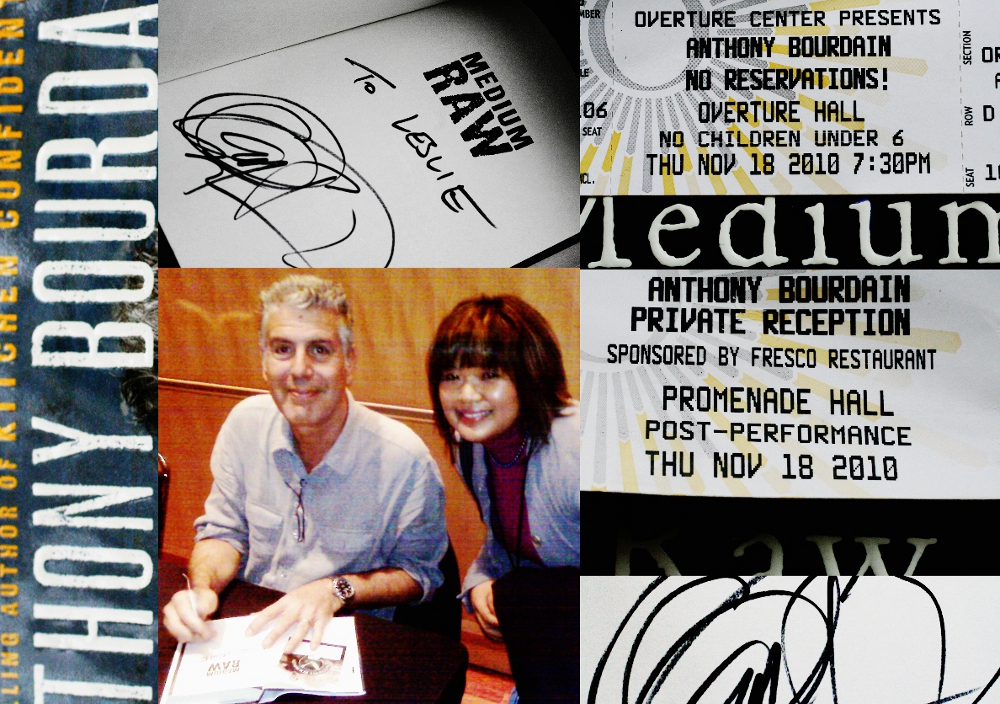 To set the scene for you, here is (approximately) the conversation Leslie and Tony were having when I took the above photo (with my crappy blackberry camera phone):

Leslie: So why did your Philippines episode suck so much?

Tony: (Laughs) Well, I clearly went with the wrong Filipino.

Leslie: Yes, you did.

Tony:  I’ve actually never gotten so much feedback as I have from the Filipino community on that episode.  I feel bad for the guy, it wasn’t his fault that it was awkward and he has been castigated by people over it.

Leslie:  You must make this right.  You have disappointed a nation.

Some people in attendance were disappointed when he admitted to having eaten his dinner in an airport, having hoped he would have tried out a local place.  The way these tours are (not) planned out though, that’s really not a feasible option.  He has so little time in each city and, after this show, for instance, he had to fly down to Florida for the next one.  It’s the old Traveling Salesman Problem (I guess booking agents aren’t well versed in graph theory…).  Try doing that for more than a few days and see if you have the energy to explore each city, or whether you want to grab the nearest warm food and go to your hotel.  I can confirm, though, for those of you who were present, that Tony did have a Spotted Cow before the night was out.

There is one thing that has me a bit annoyed though: one of the recent episodes of his show, titled “Heartland”.  See if you can tell from the blurb about the episode on the No Reservations website why it might have bothered me:

“It’s easy for the foodies of New York or Los Angeles to overlook the cuisine of America’s heartland. Anthony Bourdain is not going to make that mistake. He’s digging deep to find the foods that inspire average Americans.”

I’m sure they mean well, but that’s a lot of condescension to pack into three sentences.  First of all, the very idea that Austin, Columbus, Denver, Detroit, Minneapolis and Milwaukee are all in the same “region” is, well, stupid.  And anyone who is surprised that these cities (with a combined metropolitan population of 15.2 million people: the same as LA, 3 x San Francisco or 3/4 of NYC) have some good food is either pretty dense…or they live in NY, LA or San Fran.  I’d glad you went to Milwaukee Tony, but you’ve made three episodes about Vietnam: I think you can give Milwaukee (and Denver, Austin, etc) more than 5 minutes.

All this (good natured) whining aside, we had a great time at the show and we are looking forward to the new season of No Reservations.  But, Tony, for your sake I hope there’s a new Philippines episode in the works.