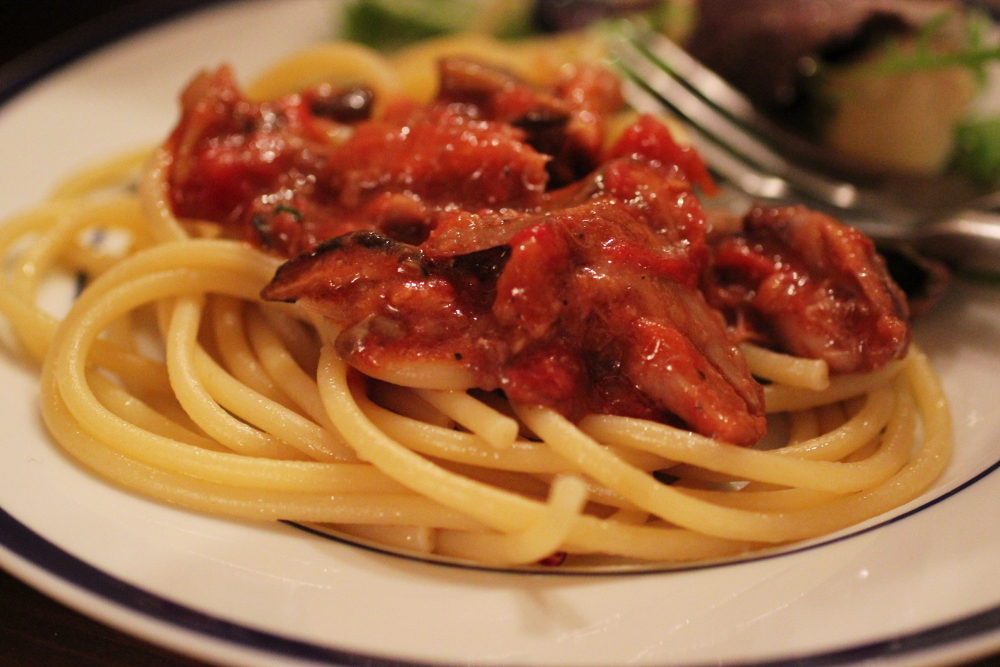 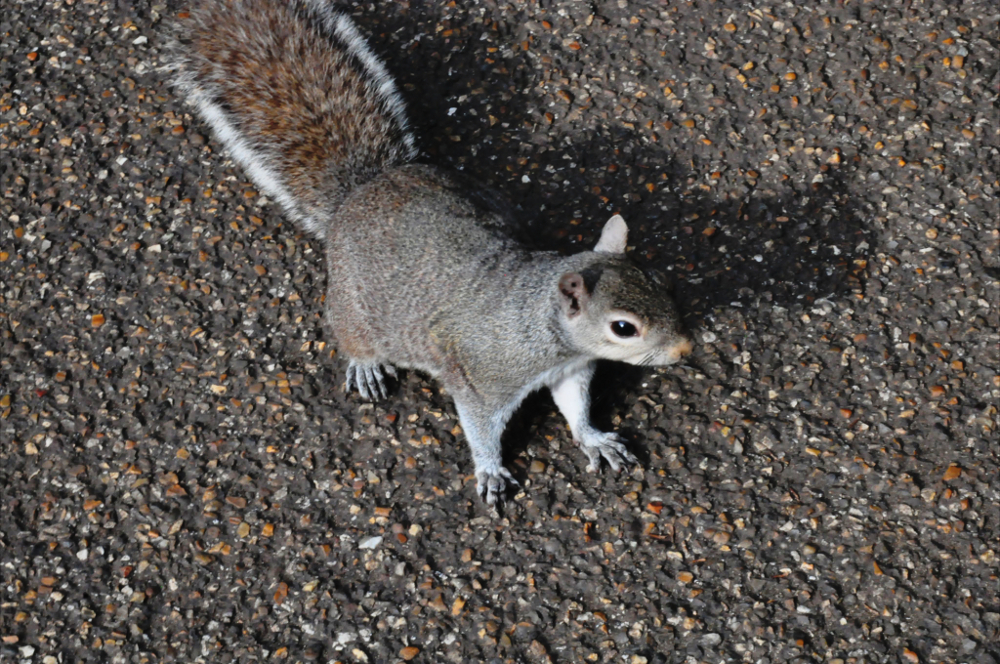 Until recently, the only member of our household who had eaten squirrel was Oliver, our dog.  And, despite his best efforts, the only one he ever managed to catch had already been dead for a while.  But one day, Leslie found one of those “100 things you have to eat before you die” lists online (this one, I believe) and filled it out.  She had eaten almost all of them, only coming up 5 or 6 things short.  One of those things was squirrel.  A few days later I was telling a coworker, Dave, about this list and he mentioned if we wanted some squirrel, his son Casey would be glad to hunt some for us.  And so, before we knew it, we had squirrels in the freezer.

I did a little research on recipes for squirrel.  The first thing I found was a tasty sounding Hmong squirrel stew on the blog Hunter Angler Gardener Cook.  The recipe was from a cookbook called Cooking from the Heart: The Hmong Kitchen in America.  (As an aside, it’s a small world: I noticed one of the blurbs on the book was written by a woman named Kalia Kao Yang, who I’ve never met, but had been emailing with back and forth asking her questions about Hmong food.)  Another recipe that sounded good was the squirrel ravioli on Deadly Food.  We also got a lot of recommendations from friends.  It’s not so uncommon to eat squirrel out here and at least one town has an annual squirrel dinner.  In fact, one of Leslie’s students named squirrel her favorite meat. 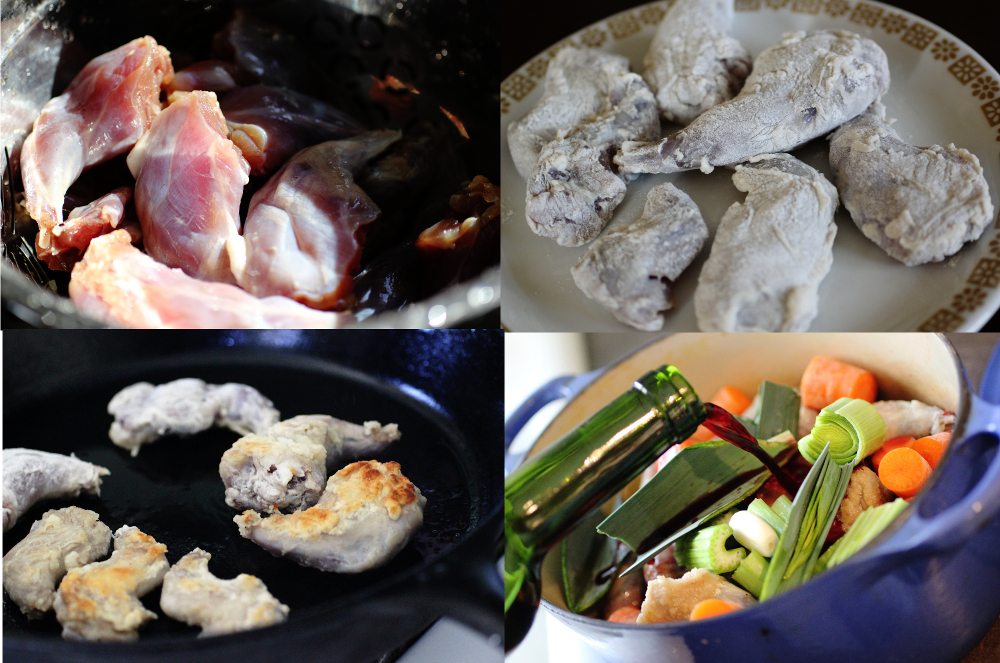 Almost all of the squirrel recipes we heard about started with slow cooking the squirrel until the meat came off the bone.  We first lightly floured and pan fried the squirrel legs (already cleaned and butchered) until brown, then put them in a covered dish with leeks, carrots, onions, celery, garlic and half a bottle of red wine and braised at 325 F for two hours.

This is the point in the story where we got a bit cocky though.  I thought: squirrel must pretty much taste like rabbit.  I know what goes with rabbit, I’ll just wing it. We decided to make a squirrel ragu, served over bucatini.  The ragu was made with san marzano tomatoes, red wine, porcini mushrooms, shallots, parmigiano, and lots and lots of garlic.  It was a rich, full bodied sauce meant to go with a dark, complex meat. 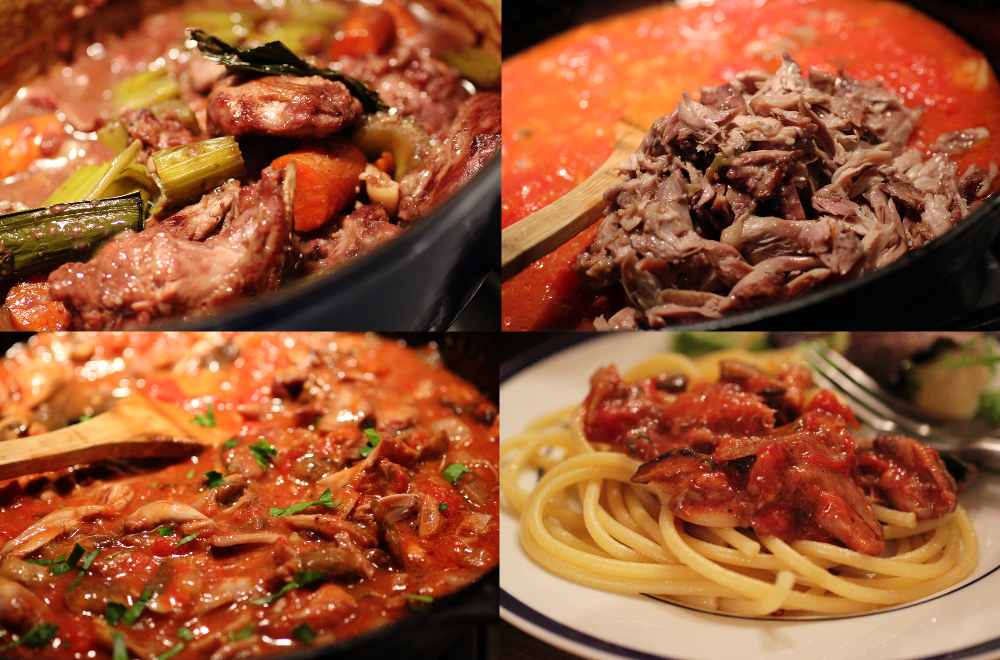 Here’s the problem: squirrel doesn’t taste anything like rabbit.  It wasn’t gamey at all; it wasn’t dark (in flavor) either.  Much more like chicken (cliché) with a little bit of pork mixed in.  As soon as I tasted the cooked meat I had two thoughts: 1) this is pretty good and 2) this doesn’t go with this sauce at all.  We made a few adjusts with the seasoning (such as adding parsley) which helped, but in the end it just didn’t work.  Cooking 101: taste your ingredients ahead of time.

So it likely wasn’t the best squirrel dish we’ll ever eat.  But that’s okay.  It leaves plenty of room for improve on the next go around.