Friday night we were sitting at home watching Northern Exposure on Netflix (we are that cool).  This particular episode dealt with a feud amongst the residents of the little Italy in  Sicily, AK.  There was a lot of tempting food and by the end credits, we both had a craving for some Italian-American comfort food.  But it had been a long week and neither of us wanted to cook.  We had 3 options:

1) There’s Cafe Four in Mineral Point (we’ll cover this place in another post).  We’ve been there numerous times.

2) A few towns down in Mt Horeb is Sole e Sapori.  We’ve been there once a few years ago and it was very good.

3) Plenty of good Italian places in Madison, most notably Greenbush Bar and LaRocca’s.  We agreed LaRocca’s have the best tomato sauce on that list, but it’s also the furthest away.

We decided to try Sole e Sapori again, since it had been so long since our first visit.  You see, the first time we ate at Sole e Sapori was only a week or two before our first visit to Cafe Porta Alba in Madison.  As anyone who knows us knows, Porta Alba is our favorite restaurant in the world and I couldn’t bear to eat at any other Italian places for several years (they’re moving to a new location right now, so Porta Alba wasn’t an option that night). 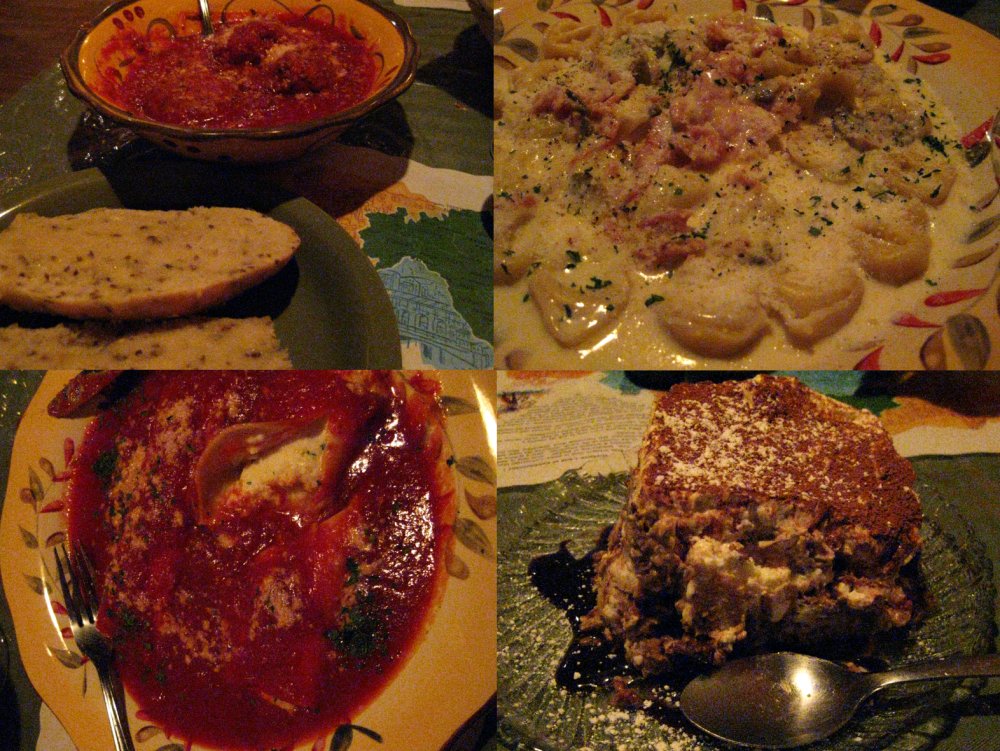 We started off with a meatball and anise bread appetizer (upper left).  Leslie had tortellini with garlic cream sauce, mushrooms and prosciutto (upper right).  I had manicotti (tube pasta stuffed with ricotta).  We also had coffee and a slice of tiramisu for dessert.

We are in agreement that the tomato sauce was the highlight of the meal.  Perfectly executed.  The meatballs were a close second.  We both declared that when we return we’ll be ordering spaghetti and meatballs.  Leslie thought the anise came on too strong in the bread, but I liked the slight licorice bite (it had definitely been toned down from our first visit).  Leslie enjoyed her tortellini very much, although she thought the prosciutto was slightly too thick and “hammy” in flavor, a problem she often encounters.  She also thought the sauce with my manicotti wasn’t as good as the meat sauce from the appetizer, but I think it was the exact same, sans meat.  I completely cleaned my plate, first eating the sauce like a soup, then sopping it up with bread.  I must have eaten the manicotti along the way, but they were not as memorable as the sauce, apparently.  Eating that much tomato (I must of had a cup of sauce between the manicotti and the meatballs) gives me awful heartburn, but it was so worth it.  The tiramisu was a bit of a letdown, it was served with a too sweet chocolate sauce that overpowered any other flavors that may have been there.

Once Cafe Porta Alba re-opens, it will be hard to get me to go to any other Italian restaurant again, but Sole e Sapori is a real asset to the driftless region.  If you’re looking for a break from supper clubs when you’re out here, or you are craving some Italian-American soul food, Sole e Sapori is a great choice.

And, if you know of any other restaurants in the area that offer alternative cuisine (by this I mean something other than steaks, fish fries, and cheese curds) by all means, let me know!